After Yannick Carrasco and Nico Gaitán left Madrid for China, Diego Simeone has just 17 outfield players. He sees Castillejo as a viable replacement. 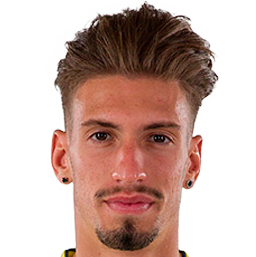 Los Rojiblancos have sold two wingers - Yannick Carrasco and Nico Gaitán - in February, leaving the wide areas as a priority for reinforcement in the summer. Castillejo is one of the players heavily mentioned in that conversation.

The Málaga-born Villarreal man is flourishing this season, resulting in interest from various clubs in Spain. Napoli, of Serie A, are also keen on the 23-year-old.

Castillejo has featured on Atlético's agenda for several years, yet his lack of physicality - an important attribute for a player in Diego Simeone's system - put the club off making a move. He now appears to have developed physically to a level that would make him suitable for the top level.

Castillejo - who has scored two goals and given seven assists in 27 matches this campaign - is under contract at Villarreal until 2020. He would command a fee of around €20 million.

He is not the only Villarreal player on Atleti's radar. Central midfielder Rodri - who emerged from Atlético's academy -  also features in the club's plans as a natural successor to Gabi.