Fellaini changes hairstyle with a look of Mickey Mouse about it

New Super League is born: all the details

Fellaini changes hairstyle with a look of Mickey Mouse about it

Manchester United's Belgian midfielder lit up social media ahead of the club's Champions league tie against Sevilla, but few thought his hair would be the talking point.

Marouane Fellaini is one of those footballers that is immediately recognisable due to his large frame and big afro hair. Even a silhouette of the big Belgian would likely have enough clues in it to suggest who it was, but ahead of Manchester United's Champions League tie against Sevilla, that image was changed.

The picture posted of the midfielder quickly went viral across social media after a piece done by GQ Style magazine had his hair collected into the shape of the famous Mickey Mouse ears. As part of the interview that was undertaken by the British outlet, Fellaini tried out different styles, but it was the Disney lookalike that caused the most reaction.

On his Instagram account, Fellaini detailed that the photoshoot was done at the studios of David Hughes and that the hairstyle crafted by Elgar Johnson and @roxy_roxy_roxy.

Follow Manchester United vs Sevilla live with AS English. 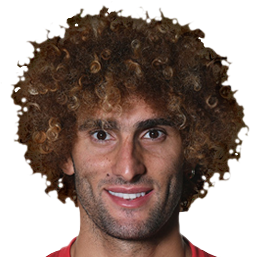 Fred will go to Manchester City or United - Shakhtar CEO