Filipe Luis stretchered off with a suspected fractured shin bone

Filipe Luis stretchered off with a suspected fractured shin bone

The Brazilian full-back will undergo tests in Madrid to determine the extent of his injury. Juanfran was taken off at half-time with muscular problems.

Atlético de Madrid left-back Filipe Luis was forced to miss the final half hour of the team's 1-5 win at Lokomotiv after suffering an injury to his left leg while challenging for a ball with Éder. The Brazilian forward went for the ball but ended up kicking the Atleti player who had to be carried off on a stretcher on 62 minutes.

Filipe spent several minutes receiving attention from Atlético's medical team at the RZD Arena. In the end he was carried off, evidently in severe pain and was replaced by Lucas Hernández. He left the stadium on crutches with Atlético explaining in a medical report that he has suffered "a major trauma to his left leg· adding that further tests will be run in Madrid. Rumours circulating in the Atlético camp this evening don't paint apositive picture. It is feared that Filipe could have suffered damage to his shin bone - possibly a fracture. If that is confirmed tomorrow, he is sure to miss the rest of the season, as well as this summer's World Cup finals in Russia and a large part of the pre-season.

Juanfran taken off with muscular problems

Atlético's other full-back Juanfran also retired early from the game - Simeone took him off at half-time as a precaution, and brought on Sime Vrsaljko in his place.  Juanfran was reported as suffering "muscular problems" 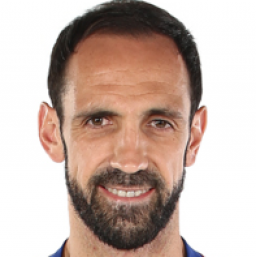