Girona's goalkeeper had been on a fine run of form at the moment as his side headed to the Bernabéu to play Real Madrid on matchday 29 of LaLiga.

Girona's goalkeeper Yassine Bounou had been a rock at the back in recent games, having gone 284 minutes without conceding a goal, his best run of the season so far, as he came into the LaLiga clash at the Bernabéu against Real Madrid. The last time he had been beaten was in the 6-1 tonking at the hands of Barcelona, in the 76th minute of the week 25 match (24 February 2018). Since then Celta, Villarreal and Deportivo had failed to get anything past him. That all ended after 10 minutes of the match against Real Madrid, when Ronaldo lashed home against him to give Real Madrid a 1-0 lead.

Prior to being beaten the keeper had made two fine stops, first from a powerful Ronaldo free-kick from the edge of the box, which he tipped over, and then he denied Lucas Váquez in a one-on-one.

Bounou had kept nine clean sheets this season, and in fact had better stats than his counterpart today, Keylor Navas. It's true he had conceded the same number of goals (23) but the Real Madrid keeper has only kept a clean sheet five times against Deportivo, Espanyol, Athletic, Sevilla and Alavés.

Bounou desperate to go to Russia

There are 10 matches left in LaLiga this season and Bounou is keen to use the Bernabéu as a stage to convince Herve Renard, the coach of Morocco, that he's worth his place in the team for the World Cup in Russia. He's been called up for the coming international break, and will share the dressing room with Real Madrid's Achraf, with whom he's good pals. He's earned five caps so far.

26 year old Bounou joined Girona in 2016 from Atlético Madrid, who had had him out on loan to Zaragoza. 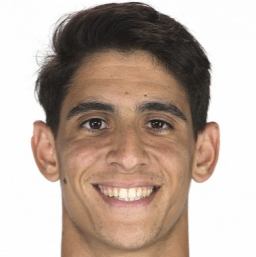