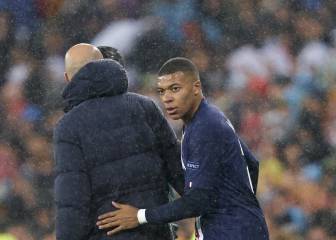 In a deal that will be far from straightforward and involves several key men, Robert Lewandowski is Real's chief target at centre-forward.

Robert Lewandowski is Real Madrid's chief target as they prepare to strengthen at centre-forward this summer. It's a transfer Los Blancos have pursued for years but which, for a host of reasons, has never come off.

Pérez after 'Lewa' ever since four-goal display against Real

Real's president, Florentino Pérez, first attempted to secure Lewandowski's signature after watching him score four against the LaLiga club in 2013, but the then-Borussia Dortmund man had already given his word to Bayern Munich.

In the years since, meanwhile, Real's designs on 'Lewa' have always been scuppered by a combination of Bayern's refusal to let him leave and the striker's own preference for a longer stay in Bavaria. However, mindful of the fact that, at 29, this is likely to be the last chance he gets to move to the Bernabéu, he has now changed his stance (and his agent).

And although Bayern are expected to remain a major obstacle towards a deal being done, Real are set to go after a signing that will involve several key individuals...

Under contract at Bayern Munich until 2021, Lewandowski wants to join Real Madrid and views this summer as the ideal moment to do so. The Spaniards' advances have failed in the past, but the Poland international now wants to fulfil a long-held desire to pull on the white shirt. And, at the Allianz Arena, they're aware of that. "The club of his dreams," was the phrase used by the club's CEO, Karl-Heinz Rummenigge, to describe Lewandowski's feelings about Real last September, in an interview in which he rebuked the player over his ferocious criticism of the German club's transfer policy days earlier. Indeed, the Pole's comments went down so badly at Bayern that they have sparked a growing wariness of the forward, even leading former captain Stefan Effenberg to call for him to be sold...

Israeli super-agent Pini Zahavi is Lewandowski's new representative. Until a month ago, Cezary Kucharski had managed the footballer's affairs but, with the pair no longer seeing eye to eye, the striker brought their professional relationship to an end and hired Zahavi. One of the world's best-connected agents, the 75-year-old - who acted as a go-between in Neymar's world-record transfer to Paris Saint-Germain last year - has been tasked with taking his client to the Bernabéu, and has in fact already sorted out personal terms with Real, who, according to several reports in Poland, could offer a transfer fee of as much as 150 million euros.

Lewandowski's name has been on Pérez's wishlist ever since that four-goal Champions League haul against Real Madrid five years ago. Fresh from seeing the striker shatter his side's 2012/13 European aspirations at the semi-final stage, Pérez enquired about his interest in playing for Real, but the marksman already had a verbal agreement with Bayern, who he went on to join on a free in 2014. Since then, Pérez has sounded out Lewandowski's camp on several occasions, and this summer has once more identified the centre-forward as a priority target...

Zinedine Zidane is another key player in a potential deal for Lewandowski. The Real Madrid coach, whose contract runs until 2020, is yet to make a decision about his own future, but has given his thumbs-up to the signing. Zidane is a firm admirer of 'Lewa', and doesn't see him as being incompatible with Karim Benzema, who could operate as a second striker behind the Pole, as he did when playing alongside Gonzalo Higuaín. 'Zizou' has never hidden his enthusiasm for Benzema, but is also aware that Lewandowski would bring the kind of goal-scoring prowess that his fellow Frenchman has not been able to provide this term (the Bayern man has netted 23 times in the Bundesliga and is seventh in the Golden Shoe standings; Benzema, meanwhile, has netted four in LaLiga).

Rummenigge is, alongside Bayern president Uli Hoeness, the chief hurdle standing in the way of a Lewandowski transfer to Real. The former Bayern and Germany player has consistently shown himself to be against the idea of the star departing for the Bernabéu. "Florentino knows we aren't going to let players leave who we don't want to leave," Rummenigge told AS a year ago. "At Madrid it is no different. Europe's elite clubs respect each other and know what is possible." The powers-that-be in Munich are tough negotiators, a fact that Real have found out at first hand when enquiries about the likes of Franck Ribéry, David Alaba and Lewandowski have been given short shrift. Real Madrid know that Bayern Munich are the major barrier between them and Lewandowski.