Real Madrid were interested in the Spain Under-19 international but Los Che have tied him down to a long-term contract with a vast release clause.

Valencia have responded to Real Madrid’s interest in Ferrán Torres by handing the 18-year-old a contract until 2021 with an eye-watering €100 million release clause.

Torres signed on the dotted line with club president Anil Murthy. In an official statement, Valencia noted that the player will remain “part of the club that he’s been with his whole life”.

The player has made seven LaLiga appearances for Marcelino’s side in this, his break-out season, and is also part of the Spain Under-19 set-up.

Torres: ´Marcelino is confident in me'

“I still can’t believe it, it’s marvellous,” said Torres. “I’ve had a lot of good times in my career considering how young I am. Everything has gone really quickly, but I’ll keep my feet on the ground and stay focused on working.”

“I hope that this club achieves all the success it deserves. Every kid in the academy dreams of making it to the first team and I’ve got there at a young age,” Torres added.

“The coach is confident in me and he’s making me learn a lot. I hope I can make the fans happy.” 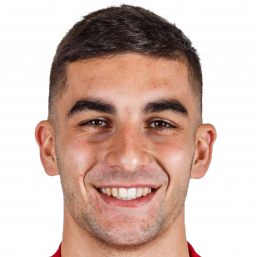