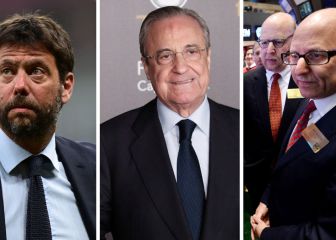 The Sevilla coach spoke following his side's 1-2 defeat to Bayern Munich at the Sánchez Pizjuán in the first leg of the Champions League quarter-final.

Vincenzo Montella offered his thoughts after Sevilla’s 1-2 defeat to Bayern Munich in the first leg of their Champions League quarter-final.

What were your thoughts on the match?

We didn’t have any luck. I’m grateful to my players for playing an excellent game against a really high-level opponent. The team deserved more. We had a perfect tactical shape in the first half. The first goal on the counter was a shame. It didn’t demoralise us, but we lost inertia.

The second half was more level but we didn’t have the energy to play on the counter-attack. We had some shots in the last few minutes and I liked that a lot, but the two goals were a shame.

Why did David Soria play in goal?

I always have to take decisions. And I always take them in a considered way, according to what I’m seeing. It was the right day to give Soria a chance. He’s a reliable ‘keeper and he’s won a Europa League. It was the right time.

Do you have much of a chance in the second leg?

Not much, but we’re going to play with the same pride as tonight, and some more. Things are possible if you believe, and I still believe. The percentages might be low, but we’ve got to play them.

Mental strength will be key in Munich

Why didn’t you use all your substitutions?

Too much importance is given to tiredness. If we were tired, we wouldn’t have finished the match in Bayern’s half. We suffered a bit in the second half, but they had possession, not chances.

I kept the third change because Navas isn’t at full fitness and I needed to make sure we didn’t finish with ten men. If that happens, they score.

I’m happy with the team. They finished with little physical energy but a lot important mental strength. That strength is what we’ve got to take to Munich.