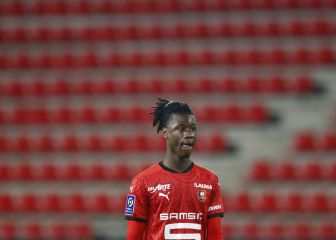 Michael Robinson could spend hours and hours talking about Liverpool - the essence of the club, the city, his first experience of standing on The Kop...

Michael Robinson could spend hours on end talking about Liverpool - the club he joined as a promising striker in 1983. For the past 20-odd years he has been working in broadcasting in Spain, but when AS caught up with him this week to chat about this weekend's Champions League final, it was the chance for him to take a trip down memory lane and remember odd anecdotes about his old club, the city, and his first, unforgettable experience of standing on The Kop...

What has Liverpool got that makes it such a different club?

Spirit. Right at the start, Liverpool was actually the city's smallest club. Everton represented aristocracy and Protestantism, essentially it was the white man's club...Outside of London, Liverpool is the only city which has two cathedrals - a Catholic cathedral and  Protestant one; and because of it's close proximity to Ireland, there has always been a lot of Irish in Liverpool. It has always had a great mix of ethnic groups - the biggest mix outside of London. You see a lot of Scousers who have Asian eyes, different coloured skin, there's a lot of redheaded people which comes directly from Ireland. And you don't see that very much anywhere else, other than in London. So Everton were the club which epitomized Protestantism, the aristocracy and Liverpool was the club for everyone else... Anfield was actually Everton's ground and they loaned it out to Liverpool, who were the poor team.

Everton were called the Toffees. I can still remember when I was a kid, there were two ladies who would have toffees in large baskets and throw them into the crowd before matches. While that was happening, down the road at Liverpool, the fans would be signing Beatles songs during matches. More than a sporting air, Anfield had a very irreverent feel about it.

Tell us about your first game as a spectator at Anfield

Liverpool 1 Burnley 0. The goal came from a cross from Ian Callaghan and was glanced in at the near post by  Ian St. John. The ball entered just in front of where I was stood on the The Kop. We had got there early for two reasons: I was only a small child, and the Kop was a terrace where everyone stood - so we arrived early to get a good position where little Michael could see the game; and secondly so we could take in the atmosphere and hear all of the singing and chanting. Anfield would be a full a good hour before kick-off. If Anfield could house about 40,000 back then, about 1,500 would be seated and the rest would be stood on the terraces.

That must have been an incredible experience for a little kid...

Years later, my dad told me that I said to him: “When I'm older I want to be a footballer”. And that was before the teams had even come out onto the pitch!! After that, every 15 days was like Christmas Eve, waiting for the next match.

Was it any different when you stepped out to the pitch at Anfield as a player?

I'd already experienced Anfield as an opponent with the visiting team - coming out of the visitors' changing room on the left and passing under the 'This is Anfield' sign; out on the pitch I could see the stands bathed in red and with the first few chords of the hymn. I felt like a little lamb going to the slaughter - I was just praying for it to be over as soon as possible. Later I had the chance to experience it for the first time with the home team. This time we came out of the dressing room on the right. And just before going down the steps, Joe Fagan, our manager, just like Bob Paisley and Bill Shankly before him, told us: “Don't forget that those people out there worship you. You are the only source of pride they have. Love them like they love you…”. I was the fifth player to go out, I kissed the club badge like the four players in front of me did, and the whole stadium sang to me that  I would never walk alone. I didn't know if I could ever live up to the expectations of me. I never really got used to Anfield.

Broken TV on the team bus

Can you describe the atmosphere that surrounded Liverpool back then?

There was almost an inverted snobbery (laughs). I can remember when the club bought a brand new team bus - one of the new one which had a television… but they put a television in that didn't work! After matches, every team would stop off somewhere and eat in a restaurant. We'd stop anywhere where we could get fish and chips - served in greasy paper and wrapped in newspaper. And we were by far the best team in the world! Robbie Fowler bought a new, bright yellow Ferrari and the club ordered him to sell it...

Was ostentation seen as an insult to the humble, working class fans?

We had to train every day, apart from Mondays in a dirty kit. I joined during the pre-season when the team was on tour. And when we got back to Liverpool, in my second training session, I took one look at my training kit and thought: ‘Hang on a minute, my socks are hard, my shorts aren’t washed – my kit’s dirty…’. I got to the training ground early, Bruce Grobbelaar, Phil Neal and myself were always the first to arrive. Anyway, I looked over to the assistant coach, Ronnie Moran and at first, I thought it might be a dressing room prank - seeing as I was the new boy. So I said to Ronnie Moran: ‘My kit’s dirty’ and he retorted: ‘...and it will be tomorrow, and the day after that, and the day after that…’ I asked: ‘Don’t we have a washing machine?’ and Ronnie replied: ‘Yes, we do have a washing machine but when this club started winning things, in 1958, we didn’t. Mrs Jones in Kemlyn Road used to do the washing for us once a week. What’s the problem? Can’t you win a football match in a dirty kit?’”

So you had to train for several days in an unwashed kit?

That's how it was. We didn't even have tracksuit bottoms. They only gave you a pair if you were injured. You had a good. thick jersey for when it was cold but that was it. It could be quite obsessive in some ways.

How do you mean?

Take my first training session for instance. We went to Anfield and from there, we'd take a bus to Melwood. I went to sit down. No, not there! So I moved to another seat. Not there! I had to sit where David Fairclough, who had only recently left, used to sit.

There was a training manual from the Bill Shankly days which was followed down to the last letter. They'd open the page for, let's say, September 24th and then the session would start… It was the most superstitious club I have ever come across. Liverpool would take their own chef on European trips, that was unthinkable back then. Whenever we flew abroad, it was always with the same pilot, Barney [Croghan], and the same flight crew. There were air stewardesses who had retired but continued to accompany the team for away games. And never in any hotel Liverpool stayed at would there be those little complimentary chocolates that you normally get in hotel rooms…

Because in 1974, the team suffered a harrowing defeat to Ajax. They put four past us. And Shankly could only find one explanation: they must have doped the chocolate. Since then, Liverpool have never eaten anything in any hotel - all of the food is prepared by the club chef.

What do you remember about the day you signed for Liverpool?

I went to see the two coaches, Bob Paisley and Joe Fagan and asked them how they wanted me to play. Fagan replied ironically: “Well, we thought you might already know that... We usually play with 11 men - as to not give the opponents a disadvantage. When you get the ball, put it in the back of the net, and if you can't do that, then pass it to someone who can. When we get the ball in midfield, we always try to pass it to another red shirt. And in defence, we give our heart and soul to not let one in…”.

Get it, give it, move

So that great Liverpool side didn't even have a defined style?

It did - it's just that they didn't shout about it. Our training sessions were as basic as you could imagine - mini-matches. Two touches, or one touch. When it was one touch, Fagan would be walking around shouting: “¡Get it, give it, move!, Get it, give it, move! And if you didn't get it right, you had to leave the game and do a lap of the pitch. Every night I'd have Fagan barking 'Get it, give it, move!' going through my head while I was trying to get to sleep. It was almost like being in the army.

In our fourth game of that season, we played Tottenham at White Hart Lane. On the way back home, Fagan at next to me on the team bus and piped up: “Something wrong here?”. “Well boss”, I said, “All of this give and move…”. “Do you know why we do that Michael? Do you like hunting? If you see a hare three yards away eating grass, you can kill it. But if the hare runs off, it's much harder to kill it. Michael, think of the ball as the hare. If it is stationary, the other team will take it. If it's moving they can't. The ball is the hare, Michael”. That was Uncle Joe Fagan, a brilliant man.

Continued tomorrow... the 1984 final in Rome