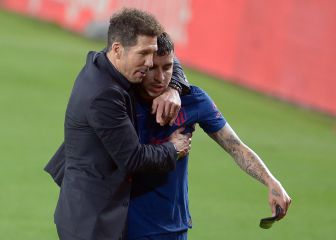 Casemiro chatted to El Larguero about Saturday's Champions League final against Liverpool: "We know they are a very aggressive team, we have to respect them".

Casemiro was the special guest on last night's El Larguero programme and gave his thoughts on this weekend's Champions League final against Liverpool as well as other issues, including the team's league campaign, how important Zidane is to Madrid and next month's World Cup finals in Russia.

Champions League Final: "We are aware of how important this game is and we are ready. We have to respect our rivals - we know this is a Champions League final and it's 50-50 for both teams".

Danger from Liverpool: "We know that Liverpool is a very aggressive side. Their three forwards are in a sweet moment of form, they have a good defence and are very aggressive in midfield. We need to respect them because they have deservedly reached the final on their own merits".

First choice in midfield: "I don't see myself as a first choice. I just try to do my job. Everyone know what my role is and if I get to play, then I'm happy".

Playing for Real Madrid: "It's been my dream since I was a small boy. That's all I ever wanted - to train and play in the white shirt".

Midfield role: "When I started playing, I enjoyed playing anywhere - goalkeeper, full-back, in attack... I just like playing football. I started out in goal and then I switched to centre-forward. I don't care what position I play in. When I was a kid, I'd get to the ground earlier in case there was a place for me in the team so I could play with the older kids".

Three or four across the midfield? "I prefer to play three in midfield but it's the coach who decides who has to play. It's much easier for me playing with Modric and Kroos because I know exactly what my job is".

References in the holding midfielder position: "The players I used to try and base my game on were Mauro Silva, Gilberto Silva and Dunga. Brazil have always had a defensive midfielder. In the old days, it was more of a sweeper role".

Saturday's final against Liverpool: "I expect it to be a very end-to-end game. They have some very fast players. At the back and in midfield, they are aggressive. I think it will be an attractive game to watch, a typical Champions League final. They deserve to be in the final and so do we".

A guess at the result: "I don't care as long as Madrid win. We have to play the game, then win it. If we can control the ball, then even better but we know this is a Champions League final and there will be moments when we'll suffer, and others when we have the ball. The game will go through different phases. Once you get to a final, you have to go out to win it".

Zidane: "I think we have to respect and appreciate the great job Zidane is doing. People talk about the players but in two and a half years, Zidane has won two Champions League trophies and now he's going for the third. Last year he was voted best coach in the world and he'll be among the candidates again this season. If we win the Champions League, he will have to be given the best coach award. Not just for what he's won but also for the job he's done. He's the perfect coach for Real Madrid and I hope he stays for many years to come".

Fine line between triumph and disaster

Losing on Saturday would be a disaster: "This team has been making history. It's normal for a team to reach the Champions League final so many times. We deserve respect for making the final again, we know that it will be decided in one game and that Liverpool have their chance to win it. The season hasn't been a disappointment. It's true that we didn't do well in the league and the Copa del Rey but we are making history in the Champions League. It won't be a disaster losing the Champions League final - it's only one game. We need to appreciate the work the players have put in to get here".

Anti-Real Madrid sentiment: "Yes, there is a current of anti-Madrid feeling, there's no doubt about that. When someone isn't a Madrid fan, they always go against us because Real Madrid is the best team in the world. People always take the opposite side. We're used to it".

Does the same happen to other teams? "It's because we are Madrid, for the club's history. The fans who support Madrid would give their lives for the club, but those who aren't want us to lose".