Quintero: quality and vision - in the mould of James Rodríguez

He began to make a name for himself while very young but failed to live up to expectations at Porto. At River Plate, he's returning to his best form.

Juan Fernando Quintero started to make a name for himself at a tender age in Colombia. His career took off at Envigado FC where he attracted the attentions of Atlético Nacional. By the time he was just 19, he had grown to become one of the Verde Paisa's big stars and made the leap to Europe, joining Pescara for 3 million euros. He surprised everyone by his swift adaptation to the European game and gained plaudits for his first performances in Serie A.

But the following season he was on the move again, signing for Porto, who acquired 50% of his economic rights before securing a 100% stake in the player six months later - just after his impressive performance for Colombia at the Under-20 World Cup. Another Colombia player who caught the eye at the tournament was James Rodríguez who was snapped up by Monaco.

He failed to reach any kind of consistency in Portugal and with little or no first team action, most weekends were spent playing for the reserves. Even after making progress with the B team, he was unable to carve out a niche for himself in the first team squad and since 2015 he has been out on loan. First stop was France with a year-loan stint at Stade Rennais.

After that he returned to South America, joining Independiente de Medellín where he recovered his form of old and ended scoring 16 and setting up a further 10. Those figures earned him a move to River Plate where, under the guidance of Marcelo Gallardo and in spite of a tricky start, he managed to eventually lock down a regular starting role and become a key component for the millonarios during the final stage of the Superliga and the start of the Copa Libertadores.

While it might be a little bold to make such a comparison, there is no doubting the similarities which Quintero and James Rodríguez share. Like the Real Madrid loanee, he is left-footed and makes up for his physical shortcomings with sheer talent. He is blessed with extraordinary technical ability which allows him to control many aspects of the team's attacking play. On top of that, he also has excellent vision - as he showed in Colombia most recent outing against Poland, in which he offered up a pinpoint assist for Falcao to score the team's second goal.

His natural position is a deep-lying forward role but he is able to slot into several of the attacking positions, and always gives the team greater mobility. At the start of his career and during his time at Porto and River Plate, he has tended to start out wide on the right. He also possesses a decent shot - he scored a wonderful free-kick in Colombia's World Cup opener, craftily sending his shot under the Japanese wall.

His main downfall is his physical problems. He has been on the receiving end of a lot of criticism during his career for being overweight. He doesn't have an athletic build and when his activity levels drop, he tends to pile on the pounds. Despite all of that, he has always ended up demonstrating that his quality is enough for him to be decisive. 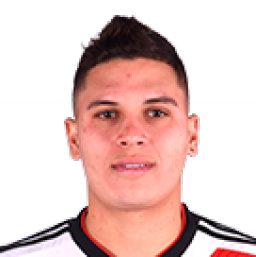