Liverpool signed Brazil's Alisson from AS Roma on Thursday for a world-record fee for a goalkeeper.

Liverpool signed Brazil's Alisson from AS Roma on Thursday making him the most expensive goalkeeper ever in the process.

The Serie A side said Liverpool had agreed a deal worth up to €72.5 million for the 25-year-old, eclipsing the previous record of €53 million paid by Juventus for Gianluigi Buffon in 2001.

Alisson made 37 league appearances for Roma last season and helped the club reach the Champions League semi-finals, where they were knocked out by Liverpool. Liverpool's necessity to buy a new goalkeeper was magnified during the Champions League final when Loris Karius made two costly mistakes. A concussion test carried out after the final proved the German had been suffering from a concussion but it hasn't stopped Jurgen Klopp pursuing Alisson.

The new Liverpool shot-stopper started all five games for Brazil at the World Cup in Russia where they bowed out in a quarter-final defeat by Belgium.

"I'm really happy, it's a dream come true to wear such a prestigious shirt for a club of this size that is used to always winning," the Brazilian told Liverpool's official website.

"In terms of my life and my career, it's a huge step for me being part of this club and this family.

"You can be certain that I'll give my all." 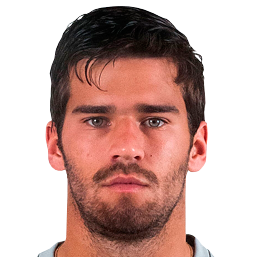