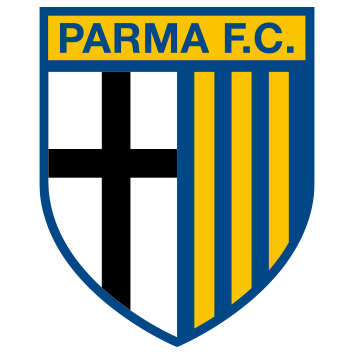 Juve brush Parma aside to make it three wins from three, the "Old Lady" securing a hard fought 1-2 win at the Ennio Tardini.

Who can stop Juventus from marching to an eighth consecutive Scudetto win? Parma gave it a go and for 45 minutes offered a dignified home display against the men from Turin. Going a goal behind withing two minutes to the reigning champions was hardly the ideal start for the Crociati but a subsequent solid defensive display with quick and incisive counters lead to an even and entertaining 45 minutes of football.

The home sides determination was rewarded just after the half hour mark as Gervinho (yes, that one) tapped home into an empty net after some fine build up work from Inglese. Both sides went in at the break at 1-1 but there was always the sense that Juventus had an extra gear to slip into whilst it felt that Parma had played to their limits.

The winning and decisive goal came just before the hour mark as a deft back heel from Croatian striker Mandzukic teed the ball up nicely for World Cup winner Blaise Matuidi who rifled vigorously into the roof of the Parma goal. From there there was no turning back and the gulf in class (and indeed budget) with the riches on the Juve bench seeing Dybala, Emre Can and the impressive Douglas Costa getting a run out. Parma huffed and puffed but lacked any spark to trouble Szczesny who had a quiet second half.

What of CR7 we hear you say.... Well, the Portuguese striker looked lively and eager but become less involved in the action as the clock ticked down. Juve march on and it will only be a question of time surely before the former Real Madrid man finds the net.

Parma v Juventus: as it happened

Many thanks for your time tonight as we enjoyed an excellent first half and saw how Juve were just too strong for Parma.... Allegri's side march on as Parma regroup with the international break imminent.

90'+4' ...too late for the Crociati as the final whistle goes and Juve claim maximim points

Cuadrado booked for a late tackle on Ceravolo

89'   Juve just running the clock down now as they keep possession... Parma have given their all but just lack the quality to break down the Serie A champions

85'   Credit to the home side as they still probe and look for a way through the Juve rear-guard.

81'   Ten to go .... Can't see Parma find a way back .... simply outclassed by the league champions with the  gulf in class (and budget) apparent

Dybala on for Juve ..Khedira making way for the Argentine

75'   A light rain starts to fall in Parma with just 15 minutes on the clock to salvage something from this game. To be honest Szczesny has been a spectator in this half

Emre Can posied to get in on the action

69' De Gaudio getting attention after a tackle from Cuadrado ...movement on the Juve bench but not Dybala this time.

61'   How will the home side react with the adverse scoreline ?

Changes for Parma - Gervinho off and Da Cruz on

Goal....Juve go ahead .... Blaise Matuidi with the goal after a delighful assist from Mandzukic

Danger as Parma hang on to the ball for a sustained period but Rigoni fails to find a colleague with his final delivery, at the other end of the ground, CR7 tries to break through but once again is thwarted

55'   Look of a hint of frustration as CR7 seems desperate to find the target... Parma still defending stotuly and looking to hit on the break

51' Bernardeschi off for Douglas Costa ...first Juve switch of the night

48' Dybala starts to warm up for Juve

Effort from CR7 but nothing to trouble the score board. Jeers from the home fans for the Portuguese players attempt

46'   Juve get us going at the Tardini... no changes at the interval

Teams heading back to the pitch ...

Card for Iacoponi after a clumsly challenge on Alex Sandro

Parma almost make it 2-1 as Szczesny saves Juve as Gervinho breaks into the box and then deprives a strike destined for goal....

2 minutes of time to be added

44' Pjanic almost pokes the ball home as Sepe dives well to repell the ball. All Juve now as they forge for a breakthrough with cross after cross punmeling the Parma box

42'   Time ticking down at the end of the first half. Pulsating game with Juve well in control but the home side looking very bright on the counter as CR7 strikes tamely at Sepe in the Parma goal

Scrap that, ref changes his mind and (correctly) books the Juve man for diving

Rigoni in the book for a trip on Bernadeschi

39'   As you were...Juve in control possession-wise but Parma defending stoutly

Parma fans in raptures as the home side draw level. Despite being under pressure for the bulk of the half, the men in white have looked dangerous on the break

The Ivorian taps into an empty net to the delight of the home crowd... Age is just a number for the former Ivory coast player

Water break as the Colombian gets attention

Cuadrado down and looks in trouble

Another Juve corner and CR7 heads wide as Bonucci stretches to try and get some purchase on the ball. More danger from the visitors 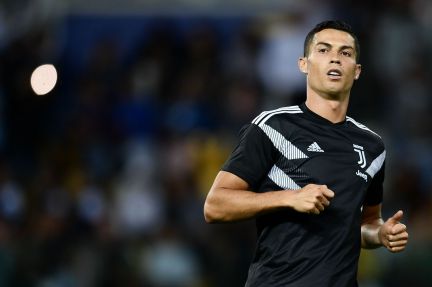 20'  Iacoponi getting attention following a clash of heads with Mandzukic...seems ok to carry on !

19'   Breakway from Parma as Barilla over hits his cross with two Parma strikers attacking the area.... frantic pace to the game at the Tardini

16' Quiet (ish) start from Cristiano, the Portuhal international being well marshalled by the men in white so far

14'   Free kick for the home team as the ball rockets off the bar ....great strike but did Szczesny get a hand on the ball from the Stulac drive ?

Card for Pjanic for a rash challenge on a Di Gaudio

Parma almost score as Gervinho weaves into the area and Di Gaudio has the ball taken off his foot by a Juve defender just as the striker was about to pounce.... Better from Crociati !

7'   The ref having a word with Pjanic and Ronaldo ....as the home side look to bounce back from the early set back.

Whirlwind start from Juve with the home side on the ropes

Disaster for the home side ... poor defending and the Croatian international pounces to bundle the ball home

Can Daversa get a first Serie A win on the Parma bench ? Can CR7 hit the target in a Juve shirt in Seria A...all will be revealed in the next 90 minutes as we get underway.....

The teams take to the pitch with CR7 carrying out his traditional pre match leap .....

The earlier Serie A game saw Inter shake off their early season sluggishness with an impressive 0-3 win away at Bologna. 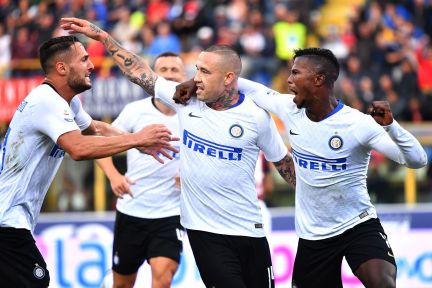 As is the case at Serie A grounds everywhere, plenty of CR7 merch on sale! 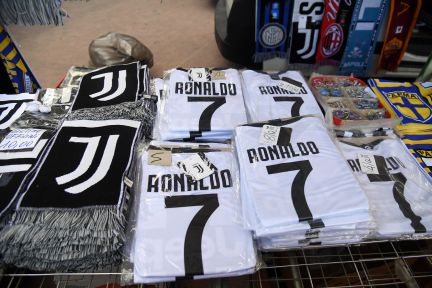 This fine Copa doc. showcases the trouble facing Parma just a few years ago and how the club have fought back to regain their place in the top flight.

Perfect temperature in Parma this evening with a mild 23C, perfect conditions for what should be an interesting clash as Juve face one of the great names in the recent history of Italian football. 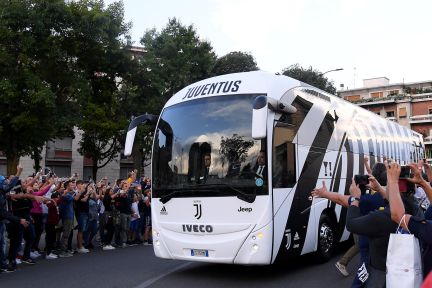 Surprise for Juve with no start for Paulo Dybala 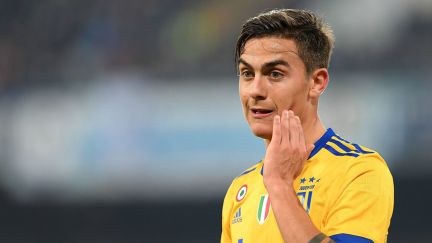 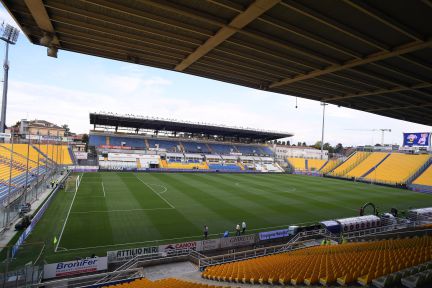 Both teams come into tonight's games with differing results in the two Serie A games to date. Juve winning 2/2 with Parma just having picked up one point in a 2-2 draw with Udinese in the season opener.

Hello and welcome to our live Serie A coverage as Parma face high flying Juventus with the table toppers facing the newly promoted Emilio Romagna side. Kick off at the Ennio Tardini is at 2030 CEST.

Juventus head to Emilia-Romagna with, inevitably, all eyes on Ronaldo and whether he can open his account with the club. Most other strikers wouldn’t receive such high-watt attention, but then Ronaldo is not most other strikers and goal droughts don’t enter his footballing vocabulary. The Portuguese striker’s lack of precision in front of goal is not for want of trying - he has had more shots on target (eight) than anyone else in the top five European leagues. Nevertheless, the reigning Serie A champions have won their first two games – against Chievo and Lazio - and will be keen to make it a third before the international break. Parma, meanwhile, have only managed to scrape together a point following a draw with Udinese and a defeat to SPAL.

After three seasons out of Italy’s top flight, Parma have returned in dramatic fashion after back-to-back promotions, most notably sealing their return to the ‘big time’ on the last day of the season. Parma-Juventus is a vintage fixture in Italy, with both sides meeting 46 times in Serie A – Juventus have the head-to-head advantage, winning 21 times and losing 10, with 15 draws. The last time the two sides met was in 2015, in Parma’s relegation season. Surprisingly, the Ducali came away 1-0 winners on that occasion, and have a good home record against the Bianconeri, losing only once in their last five games.

With both Jonathan Biabiany and Amato Ciciretti out, Gervinho is likely to get the nod for his first Parma start. In midfield Luca Rigoni is set to replace Antonio Barilla, while the back four of Iacoponi, Alves, Gagliolo, Gobbi is unlikely to change.

Juventus’s only absentee is Leonardo Spinazzola, with Allegri predicted to stick with his back four of Joao Cancelo, Leonardo Bonucci, Giorgio Chiellini and Alex Sandro. New-signing Emre Can may be handed his first league start, and could join up with Miralem Pjanic in midfield. In attack, Dybala should play in the hole as he looks to build up an understanding with new team-mates Ronaldo and Mario Mandzukic