PSV's Mexican winger has been attracting plenty of interest after his World Cup performances with Manchester United and Dortmund also watching.

Atlético Madrid and Barcelona are among a number of European clubs keeping a close eye on PSV winger Hirving Lozano, who shone for El Tri at the 2018 World Cup and has been consistently prolific in the Eredivisie following his move from Pachuca a year earlier, bagging 17 in 29 games last season.

Lozano earned a man of the match award in Mexico’s opening 1-0 victory over defending champions Germany as his side qualified from a tricky group and his coach, Juan Carlos Osorio, backed the 23-year-old for a future move to the Premier League, highlighting his speed and willingness to attack defenders.

Borussia Dortmund and Manchester United have both been credited with an interest in Lozano but Atlético and Barcelona are aiming to pip their European counterparts with the reigning Liga champions reportedly already in contact with the player’s representatives.

Atlético are eager to add Lozano’s pace to the wings but are also interested in a move for Giovanni Simeone, the son of Colchoneros coach Diego Simeone, who recently made his international debut for Argentina. Giovanni scored 14 goals in 38 Serie A appearances for Fiorentina last season and is viewed as a rather obvious long-term fit under his father at the Metropolitano. 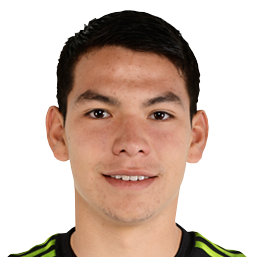