"A boy arrived and a man left": The story of Reguilón's rise

Sergio Reguilón debuted for Real Madrid against CSKA Moscow but his UD Logroñés loan spell turned him into a proper defender.

"Kid, you have to defend without falling over as easy as black pudding when the butcher cuts it," said Carlos Pouso, his former manager at UD Logroñés who coaches him during his loan season at 2015. Sergio Reguilón arrived at the club to learn how to defend and achieved his objective to the point that Julen Lopetegui puts his faith in him over Theo Hernandez and Fabio Coentrao this season as Marcelo's back-up.

The left-back arrived at La Fábrica at nine years of age, but he spent four years without playing because he never experienced the expected growth spurt at this age. After his debut with Infantil A, he would have to wait until the end of the 2013-14 season under Fernando Morientes to play again. His brother, Diego, measures 1.90 metres tall, but until that second year at Juventil, under-17, he was the same and would grow 12 centimetres in the coming year. Under Ramis with the Juvenil A, under-19, he started to play regularly. Until then, it seemed Reguilón would fall victim to the quality at the academy and Real Madrid incredible depth at underage. That was before the loan move to UD Logroñés.

"A boy came and a man left," says Juanjo Guerreros, the president of the club. "He integrated into the dressing room quickly which was different from what he had seen before." There were glimpses then that the youngster was going to reach the elite level.

That first assignment only lasted for six months because Zinedine Zidane took over the first team and Ramis asked for the return of 'Regui'. As soon as the season ended, another request arrived from Logroñés to loan the player and the club were caught by surprise. "We didn't think Real Madrid would let him leave again," says Pouso. "He played at full-back and on the wing here. He played a lot of times going forward more because he had to learn that you can't be a green traffic light for opponents."

A spell at the Escuela Municipal de Collado Villalba

He keeps contact with his first club having grown up in the mountains and after years of learning at Valdebebas. Watch, listen and shut up. Just like in Lorgoño and when he played at Escuala Municipal de Collado Villalba at eight years of age. "He signed for Madrid after he left the mountains. Madrid didn't have prebenajmines but they had their eyes on Álvaro Tejero and Borja Pascual," says his first manager and president of Collado Villalba, Antonio Tudela.

Watch, listen and shut up has served him well so far as he continues to rise up the ranks at Real Madrid. 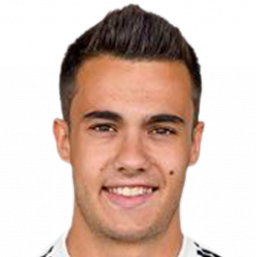 Lopetegui: Real Madrid "by far" the better team in derby