Argentina took their time to wear the young Iraqi side down, but ended up making the gulf in class show.

An unfamiliar-looking Argentina cruised past Iraq 4-0 in the first-ever meeting between the sides in the neutral venue of Riyadh, Saudi Arabia.

In the absence of most of the big names, Scaloni handed debuts to several young players, one of them being 21-year-old Lautaro Martinez, who showed his gratitude by scoring the opening goal after 18 minutes. With Argentina in control, Iraq managed to hold out for the rest of the first half and, sitting deep, created a couple of half chances on the break while they were at it. And at half time they were very much still in the game.

But the difference in quality began to show in the second half, and Argentina had their second through Pereyra in the 53rd minute. As both teams reeled in the changes, making a total of six substitutions each, the flow of the game was interrupted and things were quiet until the 82nd minute, until Pezella headed home to score his first for his country. That was game over, but ten minutes later, substitute Cervi managed a Messi-like 25-yard dribble to set himself up for a shot inside the box, which he slotted past the keeper with ease into the right corner.

No surprises with the result then, but Iraq, to be fair, had a few chances and showed intent going forward on occasions. And they can go into the game against rivals Saudi Arabia confident on Monday, where a win will be a much more achievable task.

It’s estimated that Messi will be back with the Argentina set-up for the 2019 Copa America, to be played in Brazil between June 14 and July 7 next summer. 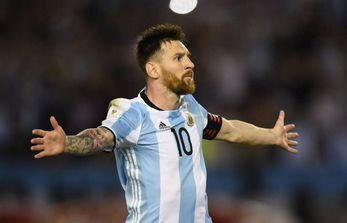 The sad news for football fans: Lionel Messi won’t be playing tonight, as he’s skipped both this friendly and the upcoming one against Brazil on 16 October in Saudi Arabia. Lionel Scaloni, interim coach for Argentina, said he’d spoken to the Barcelona man and that both thought the same thing: “For now it’s best that he doesn’t come”. The reason being that they want the “kids” to be with the national team, and “when the new manager comes in he’ll decide if these kids have the ability to keep playing for Argentina or if he will call up the players that have given us so much”.

Kick-off will be at 19:45 CEST, so in just under an hour. (Carefuly now, some sites around the internet have been showing kick-off at 20:00, but if you tune in then you'll have missed 15 minutes).

Good evening and welcome to our live coverage of the international friendly between Argentina - Iraq from the Prince Abdullah Al-Faisal stadium in Saudi Arabia.

Argentina face Iraq in Riyadh as part of a mini-tournament that also involves Saudi Arabia and Brazil, and new coach Scaloni is expected to give debuts to a number of young players as he starts a build new side, looking towards the next World Cup.

Argentina will be without talisman Lionel Messi, who is yet to confirm if he will continue with the national team following a disappointing World Cup this summer. With Kun Aguero and Angel Di Maria also missing, Mauro Icardi, who has scored 4 goals in his last 3 matches for the Inter Milan, will lead the charge from the front and will be tipped to score against the minnows from the Middle East.

This is the first meeting between Argentina and Iraq, who were recently given the nod by FIFA to host their first international matches in three decades in specific parts of the country. Their most noteworthy result this year was beating Saudi Arabia 4-1 back in February. But Argentina will be a much sterner test tonight.