'TyC Sports' report that Madrid will pay 20 million euros for the midfielder in January but allow him to remain on loan with River Plate until the Superliga has ended.

Real Madrid will sign Exequiel Palacios during the winter transfer window, TyC Sports report. The Spanish club will pay 23 million euros upfront (20 million destined to River Plate) to secure the services of the promising young midfielder, who will not join his new emplyers in January, but will remain on loan with River until the conclusion of the Superliga. He will be incorporated into the Madrid squad in August.

Atlético and Barcelona keen on Palacios

So it looks like Madrid are first past the post to sign Palacios; the River Plate youth team pearl has attracted interest from Barcelona and Atlético de Madrid. The midfielder is under contract with River until June 2021 and Diario AS understands that Madrid will offer him a five-year contract.

Palacios turned 20 at the start of October and has already played in 27 Argentinean Superliga games and another nine in the Copa Libertadores after making his first team debut with Marcelo Gallardo's side when he was still only 16 years old. He has also been called up by Argentina and made his first appearance at the full international level in September's meetings with Guatemala and Colombia, under the orders of Lionel Scaloni. 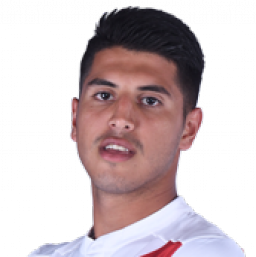 Conte out of running for coach's job - report

“If I'd left for money, I would have gone to China