Neymar's 76th-minute penalty was enough to give Brazil victory over fellow South Americans Uruguay in a friendly at the Emirates Stadium.

Brazil 1-0 Uruguay: as it happened

90'+2' That's all ... Neymar decides the match with a solitary penalty from the spot.

90'   Next up for Brazil... Cameroon next Tuesday in Milton Keynes as Uruguay face France in Paris

89'   Filipe Luis handles....danger for Brazil with Suarez to take the free. Poor strike from the Barça player as we´ll have 2 minutes of time added on.

89'   Into the final minute ... looks like time has passed Tabarez's men to get anything fom the match ?

85' Cavani carded for a rash challenge on Neymar

URU: Vecino off with Valverde on

Suarez (Mathias) off with Lemos on for Uruguay

77' Filipe Luis clattered by Luis Suarez.... Luis Suarez earlier carded by the ref following his appeal over the spot kick

URU: Rodriguez on for the sky blues with Gaston Pereiro

Goooooool do Brasil. Gol do Neymar !

Danilo caught by Laxalt and it would appear to be a correct call.

69'   Neymar finds Richarilson but the Everton player lobs the ball rather than drive a cross into the box. The former Fluminense player has made an immediate impact.

Everton player Richarlison to enter the fray for Brazil....Douglas Costa the player subbed

65'   Neymar gets a shot on target and the ball is spilled by Campaña in the Uruguay goal but the Independiente keeper manages to grasp the loose ball.

60'   Suarez looks for Vecino but the ball just overhit...Great battling performance from the Barcelona striker tonight

58' Allan set to come on for Brazil as R. Agusto makes way

57'   Total confusion as Neymar and Filipe Luis fail to understand one another ....ball cheaply given back to Uruguay

55'   Brazil have been poor it has to be said in this opening spell of the second 45'. Uruguay now in total contral and possibly time for Tite to make changes 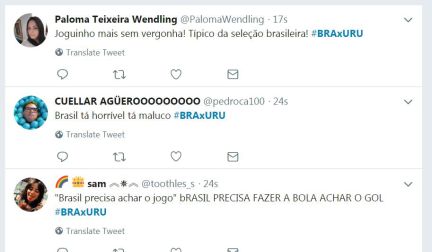 50'   Vecino latches onto a croos but just heads over as Brazil give the ball away again.

49'   Danger for Brazil as Luis Suarez prepares to strike....Decent effort from the Barça striker as Alisson gets down well to push wide 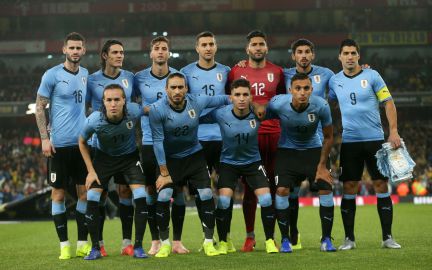 Off we go ...Brazil start the action

The whistle sounds as Uruguay finish slightly on top at the end of the half but a first 45' that saw clear domination from the Canarinho. Quick brea and we'll be back with the second half.

44'   Last minute of the half...Uruguay finish the half the stronger side as Cavani forces Alisson into action after latching onto a fine delivery from Suarez.

Competitve game here in North London which has really yet to fully catch fire.... Very likely we'll see a glut of changes after the break too.

40'   Another rash challenge as Doulas Costa and Danilo contrive to pull down Laxalt. Costa booked for his part.

33'   Brazil star Neymar during the game 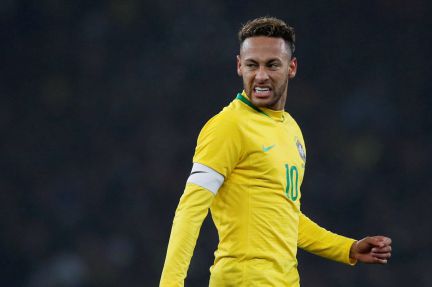 29'   Filipe Luis swings and fires a right footed effort which he fails to get on target ...just 2 senior goals for Brazil as he wins his 38th cap.

27'   Cavani beats the offside trap but fails to get any purchase on the header....

24'   Best chances of the game falling to Suarez and Neymar so far ... Brazil well ahead on "possession points"...

23' Torreira carded for a rash challenge on Neymar

21'   Boos ring out after some sustained possession from Tabarez's men.... good passage of play from Uruguay as the press Brazil back. Ball falls to Suarez and forces Alisson to touch over. 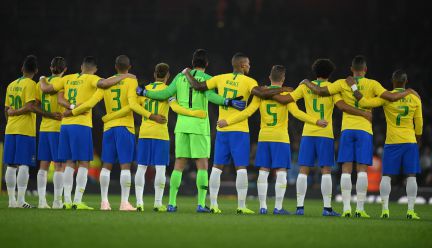 18'   200.000 Brazilians reported to be living in the UK.... with many of those residing in the Greater London area. Uruguay fans fewer in number in North London tonight.

12'   Brazil push again as Douglas Costa breaks into the opposition area...once again the linesman has the flag up for offside

Rain coming down now in North London as chants of "Bra-sil, Bra-sil" break out 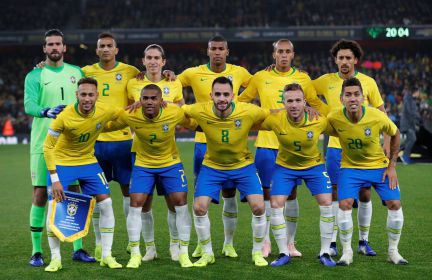 Campaña in for the injured Muslera .... the young keeper plays in Argentina with Independiente

5' Neymar to take... goes for goal but palmed away from Campaña in the Uruguay goal

The PSG man too fast for Betancur

5' Brazil now beginning to establish a pattern to the game moving the ball around briskly. Neymar wins a free for Brazil.

Very quiet from the supporters.... big crowd at the Emirates but as is the case in international games, no recognised fan areas....

2' Scrappy start as the ball bobbles abouts with neither side able to get any spell of possession together.

1' Uruguay get us underway tonight ...

Aldyr Schlee was the person the tribute was paid for ...

Teams line up for minutes silence 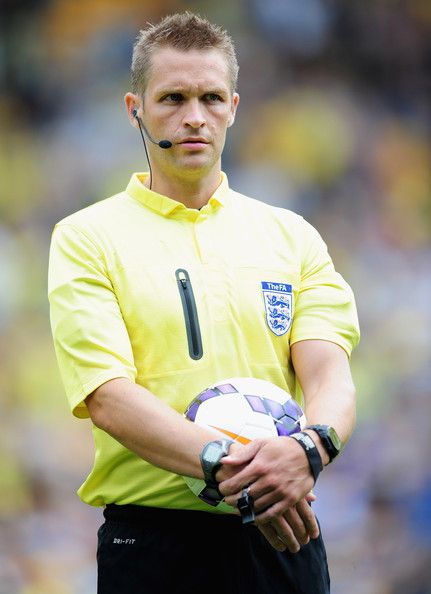 and now ...of course ...the Hino Nacional Brasileiro...

The sides take to the pitch .... in what seems to be a pretty full Emirates Stadium.... national anthem time... first up Brazil 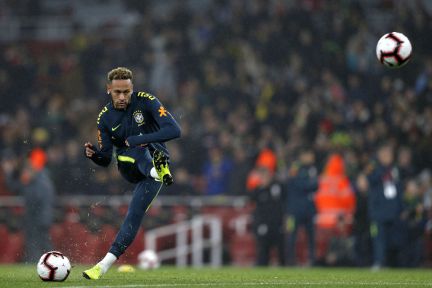 Luis Suarez trains ahead of Brazil-Uruguay 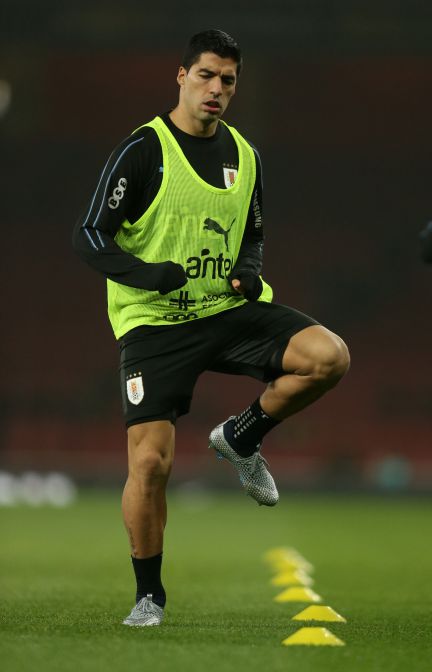 Brazil fans ready ahead of the match 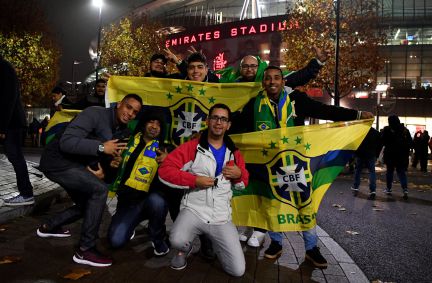 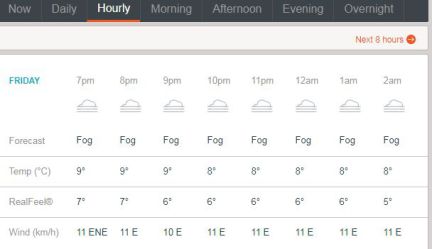 Brazil tonight in their classic kit...yellow shirts and blue shorts. Uruguay too in their home kit of sky blue shirts and black shorts.

an impressive starting line-up and bench from Tite tonight 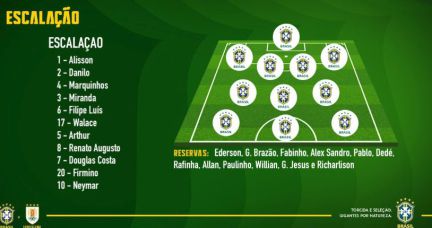 Hello and welcome to our live coverage from North London as Brazil face Uruguay. Kick off at the Emirates at 2100 CET.

Tonight's clash in London is the 76th time in history that Brazil have faces their neighbours with the men in yellow winning the game 35 times and have only been defeated  20 times with the remaining games drawn affairs.

Some big names expected to grace the North London playing surface with Uruguay boasting the likes of Suarez, Cavani, Betancur and Laxalt. Brazil too are expected to field some household names with Coutinho, Firminho, Alisson and Neymar Jr.