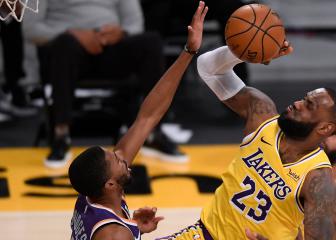 LeBron James to miss first game of the season for Lakers

The hosts, who already had an unassailable series lead, sealed a comfortable 57-run win in the final one-day international in Adelaide.

Australia cruised to a 57-run victory over Pakistan in the fifth and final one-day international at the Adelaide Oval on Thursday.

After setting an imposing total of 369-7, thanks to a record opening partnership of 284 between David Warner and Travis Head, the Australians bowled Pakistan out for 312.

Pakistan's Babar Azam scored 100 and Sharjeel Khan a quickfire 79, but the home side were always in control and celebrated Australia Day in style with a convincing win.

Warner and Head earlier got Australia away to a superb start, with Warner particularly damaging as he smashed the Pakistan attack to all parts of the ground.

No surprise who Man of the Match is - it's @davidwarner31 for his highest ever ODI score of 179! #AusvPak pic.twitter.com/M4mMELOGF6

Warner blasted 179 and Head 128 on their way to an opening stand of 284, a new Australian record for any wicket in ODIs.

Both batsmen made their highest scores in one-day internationals, with Head also recording his maiden international century.

After losing the toss and being asked to bowl first, the Pakistanis almost got the perfect start when Mohammad Amir enticed an edge from Warner with his first ball.

But a diving Azhar Ali at first slip couldn't hold onto a difficult chance and Warner was soon in full flight.

Head was far more circumspect but once the ball stopped swinging after just four overs, he began to look more and more comfortable.

On a flat pitch that offered nothing to the bowlers, the Australians were untroubled until Warner began to cramp, restricting his movements.

Warner eventually fell when he swatted a short ball from Junaid Khan to Babar at point with the score on 284.

Australia were headed for a score well over 400 when Warner and Head were in full flight but Pakistan fought back with some late wickets to restrict them to 369.

Babar century in vain for Pakistan

Pakistan's chase started badly when Azhar fell leg before to Mitchell Starc for 10, but Sharjeel and Babar took up the attack and moved the score to 140 before the big hitting Sharjeel mistimed a pull shot and skied a catch to wicketkeeper Matthew Wade.

Babar began to pick up the pace and reached 100 from 107 balls; however, soon after bringing up his fourth ODI century, he holed out to Head at mid-on.

Shoaib Malik retired hurt when he was hit on the arm by a Pat Cummins short ball and despite a defiant 46 from Umar Akmal which took the visitors past 300 runs, Pakistan ultimately fell short.