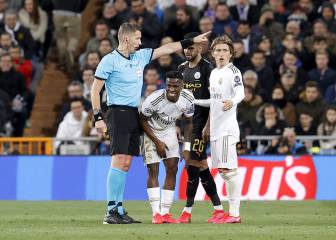 Real Madrid lost to Man City by two errors to one

Barça ended up beating Leganés last night, but it felt like a hollow victory. It came ‘in extremis’, from a penalty, and after Ter Stegen has saved the day several times. Leo Messi converted from the spot and didn’t celebrate. Just like in Paris, it was in midfield where Barça looked most vulnerable, and where they were unable to control the game. They couldn’t elaborate play, or suppress their opponents’ advancements. It was strange to see Barça suffer so much just in the area where they had based their excellence during those golden years which now seem irredeemably lost. As their midfield continues to fade, all eyes have turned on Luis Enrique, who keeps tampering but with little or no effect.

Support for the coach

As announced, Bartomeu, made an appearance yesterday in an attempt to calm the waters after the Paris disaster. The most relevant thing he said was that Luis Enrique is the coach which the club wants in charge, but what happened later on Sunday night didn’t exactly help. The ‘Grada de Animación’, the rowdy section of the stand created in a similar mould to the one Madrid have at the Bernabéu, began chanting “Luis Enrique! Luis Enrique!” as soon as the game got underway. Meanwhile the rest of the ground answered with whistles. The duel repeated itself several times over. On occasion, the response was “Barça, Barça!”, and sometimes, whistles to drown out the chants in support of the coach. It was clear that the public is not with Luis Enrique.

The stadium’s rejection to the supporters’ stand’s cheering was reminiscent of what we saw in Sevilla. The ‘Biris’, who have been given the dubious honour of being considered ‘a violent group’, targeted the president, who they called a puppet. And the rest of the ground responded by whistling them. It’s good news when those groups of radicals lose the monopoly they have on the stadium’s voice. They had been spoiling the atmosphere in grounds across the country for too long but now, after the death of Jimmy, they seem to be emerging again. It’s good that the majority, who are usually silent, make it known that they are not with them.