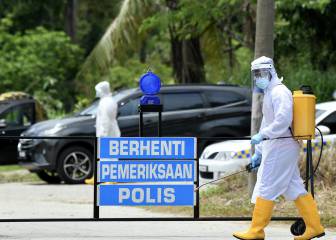 England coach Eddie Jones has called for World Rugby's intervention to stop a repeat of Italy's unconventional, though perfectly legal, tactics, but Clive Woodward was a fan. Warriors @ Cavaliers

Italy's 'no-ruck' tactics in their 36-15 defeat on Sunday drew the ire of England coach Eddie Jones, but Clive Woodward felt their strategy was "innovative and inspired".

During Sunday's Six Nations encounter at Twickenham, Italy opted, quite legally, not to compete at the breakdown and instead attempted to steal the ball from the scrum-half, causing confusion in the England ranks. By not forming a ruck, the Italian players avoided bringing offside into play, meaning they could disrupt the English play behind where the tackle took place.

The English players were so confused by the Italian move they sought clarification from the referee Romain Poite, who responded: "I'm sorry; I'm a referee, not your coach".

Jones, whose side fought back from 10-5 down at half-time to win 36-15, was completely rattled by the Italian's tactic and insisted it was "not rugby" and called for intervention from World Rugby, but Conor O'Shea hit out at criticism and defended his side's approach.

Woodward, who led England to World Cup glory in 2003, commended Italy for having the bravery to try and outfox a superior opponent in such a way.

"I totally support Italy and their use of their innovative and inspired tactics at Twickenham on Sunday, it was one of those rare moments in Test rugby that, as a former coach and player, make you sit bolt upright in your seat and think, 'Wow, this is different, this is new'," Woodward wrote in The Daily Mail.

That was a rollercoaster 80 minutes of rugby... pic.twitter.com/r0wn7xAeIj

"What we did see at Twickenham was a very gutsy and clever, if ultimately unsuccessful, response from a wounded Italy side that felt under pressure.

"Against a superior team and a rugby nation with infinitely more resources, Italy went down fighting and scheming and plotting. It was behind the lines - literally - guerrilla war and I found it compulsive viewing. It's what David always has to do if he is to stand any chance against Goliath.

"And Conor O'Shea is absolutely right about it being wrong for people to jump on this, because Italy have had the guts to utilise the tactic for 80 minutes at a packed Twickenham.

"If New Zealand or one of the big boys had come up with it in a big game, we would be hailing a tactical master-stroke."

Scotland fly out of blocks with opening day win over Ireland