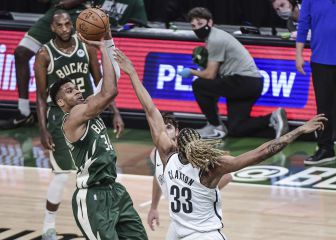 Bucks even series after Net's Iriving exits with ankle injury

The International Tennis Federation (ITF) will restructure the lower levels of the sport in a bid to significantly reduce the number of professional players.

The International Tennis Federation (ITF) will restructure the lower levels of the sport in a bid to significantly reduce the number of professional players.

A three-year review by the governing body of professional and junior tennis found not enough players are making a living from the game and that the age of those players is increasing.

Around 14,000 players currently compete in professional events, almost half of whom do not earn any prize money.

The ITF would like to reduce this to no more than 750 men and 750 women and the reforms, which have been approved by the ITF board, is for the introduction of a new Transition Tour from 2019.

The new tour would replace the lowest level of professional tournaments on the ITF Pro Circuit, with players earning ITF entry points instead of ATP or WTA ranking points. The two systems will be linked to ensure that the more successful players are able to use their entry points to gain acceptance into higher-level tournaments. Transition Tour events will be held within a localised circuit structure in an effort to reduce costs for players and tournament organisers.

'Too many' in professional tennis

"Over 14,000 players competed at professional level last year, which is simply too many. Radical changes are needed to address the issues of transition between the junior and professional game, playing affordability and tournament cost," ITF president David Haggerty said.

"The next step is to ensure the structure of professional tennis is fit for purpose through a targeted job opportunities approach that will create a smaller group of true professional players."