The Cristiano and Benzema striking partnership 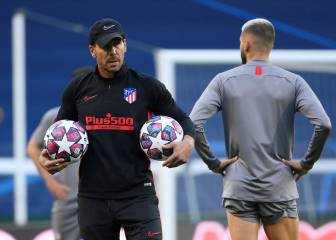 The Cristiano and Benzema striking partnership

Watching Wednesday's Champions League game in Munich, I felt that Cristiano's evolution has come full circle and that  Zidane has finally found the best way to maximise his strike force. At present Madrid are playing with Gareth Bale sitting deeper and the formation is more akin to a 4-4-2 system. In last Saturday's Madrid derby the Welshman played deeper and helped out in defensive duties as he did again at the Allianz Arena. By contrast we saw little in terms of offensive play from the Cardiff born player apart from a mazy run on the left wing and a headed attempt. It's gratifying to see Bale helping out in all areas of the pitch now as does Lucas Vázquez and I've no doubt we'll see the best of the Welsh international when he's fully fit, of that I'm confident.

The "BC" attacking option

What was rewarding to see in Munich was the inter-play between Benzema and Cristiano with both players switching from the last man in attack with Benzema even playing in a "9 and a half" position sitting behind Cristiano where he maximised his vision and ability to take defenders on. Ronaldo moved around the area with greater freedom and looked like a player hungry to score. Over time his play has altered with his lightning burst of pace now given way to a predatory style of lurking in the box and as he showed against Bayern, he still retains that lethal goal scoring instinct.

I am impressed at the way both players are currently linking up, especially so that Benzema is in an excellent vein of form and his confession in Munich that he has shed five kilos was revealing and goes some way to explaining his form in the past. The Frenchman and Cristiano have been playing together for some time now and you can see the telepathy between both players intuitively knowing what the other will do. They could go on to be another Gullit-Van Basten pairing or even a Butragueño-Hugo duo! To make things work however it's essential that Bale plays as part of a 4-4-2 system and that includes being part of an already oversubscribed midfield and that's already a something we're starting to see materialising.