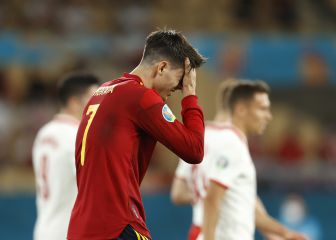 Real Madrid have three games left in LaLiga: Sevilla at the Bernabéu, Celta Vigo at Balaídos and Málaga at La Rosaleda. They can afford to draw one of them and still be crowned champions. Barcelona are keeping the pressure on, as they are duty-bound to do, but as the days are torn off the calendar, the title edges closer to Madrid's clutches. On Saturday, Zinedine Zidane's men certainly enjoyed an easy evening. Against an already-relegated Granada, victims of senseless investors who have turned the club into a fattening farm, they quickly had the match won at Nuevo Los Cármenes. The first two goals, both netted by James Rodríguez, came early, and by half time they'd added a brace from Álvaro Morata.

So it wasn't much of a contest in Andalusia. It wasn't likely to be. A Real 'Plan B' who'd already dealt with far tougher away assignments weren't going to let themselves come unstuck here. There was greater intrigue at the Camp Nou, where a breakaway Cédric Bakambu leveller left the home fans on edge for a good while. But just before the break, up stepped that man Leo Messi yet again to break the deadlock. Even then, Barça couldn't entirely breathe easy; not until their third arrived, by which time the clash was heading into its final stages. They went on to seal a comprehensive 4-1 scoreline thanks to a dinked penalty from Messi, who now has a mammoth 35 LaLiga goals this term. Incidentally, it was a spot-kick that came about after a sublime trick by Neymar. One for the annals.

There was even more to get one's teeth into at the Calderón, where Eibar were narrowly defeated by an Atlético Madrid side battling to ensure third place in LaLiga and, at the same time, readying themselves to host Real in the Champions League. The days have gone by and I can see that people really do believe. Following the game (which was rescued by a last-gasp Tiago Mendes block almost from on the goal line), the crowd stayed behind, applauding and calling for the players to come back out. They made their way back out to return the applause, of course, in an act of shared faith and mutual commitment to the heroic effort they need to pull off together on Wednesday. Real Madrid have a big lead, but it won't be a comfortable evening for them. Atlético Madrid believe.

Simeone: Nothing is impossible for Atlético Madrid