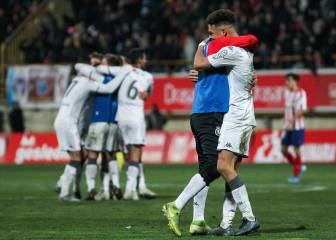 A combination of intrigue and official invite took me to Qatar to watch the Emir Cup final. There was something special about the game because it constituted the first stadium to be finished for the Qatar World Cup, sitting on top of the site of the old one. However, this particular ground has not been remodelled; it’s a whole new concept, and a mightily impressive one at that, so much so that Infantino was also in attendance.

Moreover, for me there was also something endearing about the game: Xavi’s side Al Assad came up against Sergio García’s Al Rayyan. With both involved, myself and Alejandro Elortegui, who accompanied me on the trip, talked at length about the occasion. Sergio García’s form since coming over has been nothing short of brilliant and this game was his swansong – he’s returning to Spain, to Espanyol. His time here has convinced those watching and the player himself that he is up to competing again in an elite league. Xavi, on the other hand, will remain in Qatar, and is happy here with his whole family and does numerous things off the pitch, as he explained in recent interview with Aritz Gabilondo. The ex-Barça star is well-though-of, something I witnessed with my own eyes. He also clearly keeps his finger on the pulse of happenings in Spain, and knows things inside out.

One of the lures of the game was to experience, first hand, the wonders of this cooling system in the stadium. This time of year the heat is fierce. In the morning, around eleven, we were taken to see a centre for the mix, production and treatment of different forms of grass for pitches. The visit was interesting because one of the subjects of discussion was the huge effort made by people here to fight, down to the finest detail, to make it a great World Cup; however, all of this was done in 45-degree heat - my only comparable memory of being so hot was in Écija, Seville, when I went to see one of Manolo Vázquez’s last bullfights.

The match was played at 7pm, with the temperature hitting 41 degrees. By the end it was 38. Yet inside the stadium it remained a cool 19 degrees, the perfect temperature for the players, but too cold to be watching comfortably from the stands. Luckily we had a jacket with us after being warned by Sergio García, who had trained there the day before.

This marvellous system works through a mass of heavily chilled water (cooled at a huge desalination plant one kilometre away), which cools down compressed air, brought in through a pipeline, and is pumped around out through nozzles lined up at the top, middle and bottom of the stadium. The feeling we got from out seats in one of the director’s boxes was a constant fresh breeze hitting us, not dissimilar to watching a game up in northern Spain by the Cantabrian Sea, something akin to El Molinón or El Sardinero at the beginning of October.

Essentially, this is a wonder of modern technology. At half time, the president of the Organising Committee of Qatar 2022, a young man who speaks Spanish with an accent from the Chamberí district of Madrid (the son of a diplomat who spent his adolescence in the Spanish capital), was euphoric. In a close circle with Ramón Calderón, who introduced us, he proudly declared: “Nobody thought this was anything serious, but here we are…”. And we certainly saw it.

It was a nice match, the opening ceremony simple and beautiful, devoid of the pretentious and excessive display we’ve have seen in this corner of the world recently. Xavi’s side came out 2-1 winners as the former Spain midfielder sent through Hamroun for an 89th-minute winner, sparking pandemonium. It was also a joy to watch Xavi once again take control of the ball, and set the pace of his team-mates and the play. He was deployed further forward, to remove the shackles of his defensive duties, the game lighting up when the ball reached his feet. Sergio, for his part, is also the superstar of the other team, a brilliant striker who was unfortunately struggling with a groin strain and it showed. “I’m going to play because it’s the final and my last game; in different circumstances I wouldn’t play,” he told us in the morning.

The general level of football is not great, either tactically or technically, and Calderón’s pertinent words at the end summed it up: “Playing football well is very difficult. That’s why the few that are genuinely great players win so much.”

I have to say that it was a relief to leave, not because the game had bored us but because the 37 degrees outside were a welcome change. We walked back to the hotel, close by, and spent fifteen minutes “soaking up the heat”, before getting back to the air-con – much more moderate than the stadium, that’s for sure. We only went inside our accommodation once we had recovered.

We had dinner with Iván Bravo, a Spaniard who runs the Aspire Academy, a state organisation set up to raise the game of Qatari sport, its main aim to create a team to compete at the World Cup. That same night he was flying to Barcelona, where Cultural Leonesa, Aspire’s sponsor, were taking on Barça B in the promotion play-off to Spain’s second division.

In the meantime, there is the issue of the labour law, which before was allowing major construction companies worldwide to abuse cheap labour involving immigrants – Nepalese, mainly – and is now becoming more moderate. This is another benefit of football and its universal power to move incentives and the way people think, going some way to remove its sole association with packs of hardcore fans, as many would be led to believe.

Therefore, I returned to Spain convinced afresh that the people in Qatar take things seriously and want to do a good job to make the World Cup a success. And, given the tournament will be in the autumn, there won’t be such a pressing need to stoke up that air-con system – my goodness, was it excessive. Undoubtedly the thrill of that first night.

Khalifa International: The refrigerated stadium in the desert