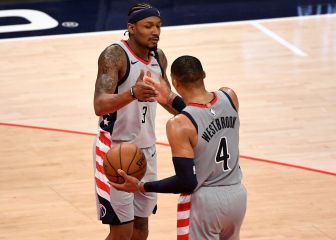 With Raikkonen taking pole ahead of Vettel, Ferrari's prospects of ending their wait for a first Monaco triumph since Michael Schumacher's success in 2001 always looked extremely good.

By contrast Hamilton, having cut the gap to Vettel to six with victory in Barcelona last time out, saw his chances of a big points haul on the tight streets of Monte Carlo severely limited by having to line up 13th on the grid.

The Briton was able to work his way up to seventh, but four-time world champion Vettel is now a full race victory ahead after he successfully overcut Raikkonen in the pit-stop phase.

Ferrari's decision to have Vettel overcut his team-mate this early in the season may lead to questions over their strategy following the Italian team's first one-two since the 2010 German Grand Prix - when Felipe Massa received a coded message to tell him to let Fernando Alonso aside to claim victory.

Daniel Ricciardo jumped Mercedes' Valtteri Bottas and Red Bull team-mate Max Verstappen in the round of pit stops to claim the final spot on the podium.

Jenson Button's one-off return to replace Fernando Alonso - racing in the Indy500 on Sunday - proved a disappointing one as he had to start from the pit lane because of a 15-place grid penalty for changes to his power unit.

His race came to an end following a crash with Sauber's Pascal Wehrlein, which led to a late safety car, though it did not prevent Vettel from cruising to maximum points.

After Raikkonen dived into the pits, Vettel stayed out five laps longer and took full advantage of the clear air.

With an average pit stop at Monaco taking 19 seconds, the German built an advantage of 20 seconds over the Finn.

And it proved enough of a gap for him to successfully execute what proved to be a race-winning overcut.

Frustrated at being jumped during the round of pit stops by Ricciardo, who recorded three consecutive fastest laps, Verstappen did not hesitate to vent.

Button to Alonso: "I'm gonna pee in your seat!"

As he lined up to start from the pit lane, Button received a heart-warming radio transmission from his former McLaren team-mate in Indianapolis.

But Button ignored Alonso's instructions to take care of the car, joking : "I'm gonna pee in your seat!"

Unfortunately the Briton would damage the car in a different manner later on following his crash with Wehrlein.

BUT (in : "I'm going to pee in your seat..." #MonacoGP pic.twitter.com/VZiNHxCemX

Wehrlein left leaning on the barriers

Button's race came to a premature end as his attempt to overtake Wehrlein at Portiere resulted in the bizarre sight of the German's car on its side pressed against the barriers.

Both drivers were forced to retire, the incident leading to the safety car being deployed, but Wehrlein - who missed the first two Grands Prix of the season following a huge crash at the Race of Champions - was unharmed.

Asked on team radio if he was OK, Wehrlein replied: "I would be better if I could jump out!"

The drivers have a week off before heading to Montreal, where they will have more room for manoeuvre at the Circuit Gilles Villeneuve in the Canadian Grand Prix.