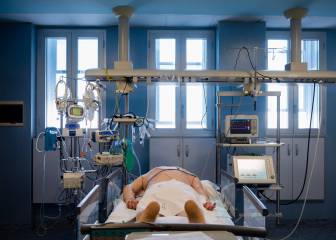 Coronavirus live: UK could be locked down for 6 months

The Cleveland Cavaliers and Golden State Warriors are about to go head-to-head in their third consecutive NBA Finals, but that does not mean everything is the same.

Most of the pieces in the puzzle are similar, but there are have been a lot of changes to both teams over the course of the past year, some bigger than others.

Omnisport's Jordan Heck takes a look at the biggest differences from last year's Finals, won by the Cavs.

Before we tackle the main changes, we would be remiss if we did not mention the absence of Steve Kerr on the court for Golden State.

The record-setting coach has not been on the bench since the second game of this year's playoffs as he deals with lingering issues from back surgery last year.

However, Kerr not coaching during the Finals (assuming he does not return) probably will not be too big of a deal considering the Warriors have done just fine without him. He is still with the team on their off-days, going over video and getting his message across.

Now, it's on to the five biggest changes to the respective teams.

THE WARRIORS HAVE KEVIN DURANT

This is the most obvious answer, but it is such a big deal it would be ridiculous not to include it. Durant is a former league MVP and probably the second-best player, joining what already was perhaps the most talented team in the league. The Cavs struggled to defend the Warriors' sharp-shooters a year ago, so the addition of Durant will only make life more miserable, as LeBron James can attest.

"He's one of the most dangerous guys we have in the world already," James said of Durant this month. "So it makes it even more dangerous when you equip that talent, that skill with those guys."

When Durant first headed to Golden State, some believed it would cause disruption because there would be too many mouths to feed. But that just hasn't been the case. The Warriors have assisted on 70 percent of their shots this season, which is the highest rate in 13 years.

Cleveland's additions of Kyle Korver, Deron Williams and others may not go pound-for-pound with the Warriors bringing in Durant, but these players do make a noticeable impact from a year ago.

Korver gives James an additional shooter, which can be deadly off the bench, and can also make timely three-pointers, which he proved in the series against the Atlanta Hawks when he made 11 in four games.

Williams is another big add as a veteran guard brought in this February. The Cavs were in desperate need of someone to take control when Kyrie Irving sat, and Williams brings that.

"He's given us a huge boost," James said of Williams in April. "We needed him. We're happy we got him."

One of the reasons the Warriors have been so dominant in recent years is because of their depth. They still have a deep lineup, but now the Cavs have brought in some other players to compete.

Obviously adding in Durant will make an impact on Thompson, but a drop of 10 points per game is pretty significant. And the fact he is not making shots at the pace he used to should be very concerning. But Thompson is not worried about his shooting woes, at least not until the Warriors start losing games.

"Obviously, you want the shot to go in more frequently, but that's basketball,” he said earlier this month. "[I'm] due for a few big games or whatever. But you can't get caught up in percentages, especially when you're winning. Just got to make winning plays and play hard and everything else will take care of itself."

KEVIN LOVE HAS IMPROVED IN THE PLAYOFFS

Kevin Love had a big moment in Game 7 last year when he shut down Stephen Curry on the Warriors’ final possession, but overall in the series he was pretty ineffective. He averaged 7.3 points, 5.9 rebounds, shot 36 percent from the floor and 26 percent from beyond the arc. He did miss a game, and came off the bench in another, but his game was clearly off.

Heading into the Finals this year, he is a much-improved player, especially on defense, but his offensive stats look better as well. Against the Boston Celtics in the Eastern Conference Finals, Love averaged 22.6 points, 12.4 rebounds, shot 48 percent from the field and a ridiculous 53 percent from three-point range.

If he can carry that momentum into the NBA Finals, he will be a key difference-maker for Cleveland's upset bid.

STEPHEN CURRY IS HEALTHY ... AND ON FIRE

Stephen Curry played all seven games in last year's NBA Finals, but you have to wonder if he had some lingering injury concerns. He was hurt in the team's first playoff game against the Houston Rockets and missed the next two games. He then returned briefly before injuring himself again, missing the next four games.

If nothing else, fatigue was a factor for Curry in last year's Finals. The Warriors fought hard in the regular season to achieve the 73-win season and ended up going to a seven-game series against the Oklahoma City Thunder and then a seven-game Finals with the Cavs. That's a lot of effort expended, especially considering Curry was just coming off an injury.