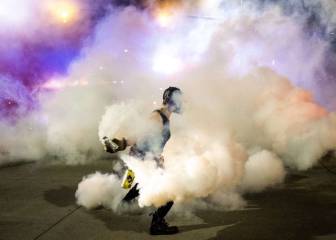 Rafael Nadal was far too good for Robin Haase at Roland Garros, producing yet another clay-court masterclass in the Paris sun.

An imperious Rafael Nadal blew Robin Haase away to reach the third round of the French Open at a canter.

The tournament favourite, bidding to become the first player in Open Era history to win the same grand slam 10 times, needed only an hour and 49 minutes to win 6-1 6-4 6-3 on Court Philippe Chatrier.

On course for another Grand Slam

Nadal hammered Benoit Paire in the first round and has now lost only one of 20 matches on clay this season after his latest Roland Garros masterclass in the Paris sun on Wednesday.

The 14-time major winner withdrew from his favourite grand slam last year due to a wrist injury ahead of his third-round match, but looks in great shape in his quest to make history 12 months later.

'King of Clay' Nadal did not face a single break point in a magnificent service exhibition and prowled around court like a man on a mission as he set up a meeting with Nikoloz Basilashvili in round three.