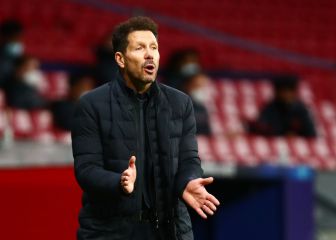 With doubts still outstanding of a new deal having being signed or not (I've been told he's yet to renew as he's anxious to get Iniesta's situation resolved), Messi keeps playing football. He offered another virtuoso display in Vitoria bagging two goals and hitting the woodwork. There was a slight blot on his day with the penalty miss which was, it has to be said expertly stopped by Pacheco. With his three posts against Betis, the brace yesterday coupled with the penalty save and yesterday's crossbar, that's a potential seven goal-haul. The Barça No. 10 seems to be everywhere on the pitch, starting moves, dribbling, shooting on target, helping out in defensive tasks. An out-of-this-world player who indeed is priceless.

Atleti Madrid don't have Messi in their side and aren't so dependent on any individual with more focus on the collective. They offered a polished display last night against Las Palmas and were leading 0-2 after just four minutes with two fine foals from Correa and Carrasco. They went on to three more in the second period and all were beauties with two moments of class from Koke, and a late strike from Thomas who had earlier replaced Gabi. The team responded wonderfully after the disappointment of Girona and are coping as well as they can with the shackles of the FIFA transfer ban. These are worrying times for Las Palmas, rock bottom at the foot of the table and with six goals conceded already.

Real Madrid will presented with the league trophy tonight at the Bernabeu with Juan Luis Larrea the individual from the Spanish FA on hand to present the trophy. The tradition here in Spain is to present the trophy for the previous season at the beginning of the new campaign. The logic being that the league winner may not be known on the last day of the season and this avoids replica trophy's journeying around the country. Valencia will be the side to witness the ceremony and Zidane will be missing Varane, Vallejo and Sergio Ramos which presents a defensive headache for the French coach who will look to Casemiro or even Llorente to stand-in. He's just left but maybe Real Madrid are already missing Pepe.