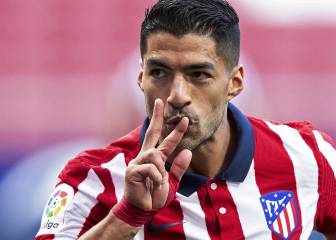 Suárez and Ansu Fati grab the headlines with sizzling displays

Valencia earned a club-record eighth LaLiga victory in a row at Espanyol on Sunday. Their ninth in 12 league games in total this term, in which time they've dropped just six points. Their haul of 30 points leaves them four off leaders Barcelona, who they play next, and six ahead of Real Madrid and Atlético Madrid. And they won at the RCDE Stadium with Gonçalo Guedes, Carlos Soler and Simone Zaza on the bench. They did so, too, with the necessary dose of good fortune, of what in Spain we often call 'champion's luck', having seen two Espanyol shots rebound off the post and with keeper Neto their best player for significant spells.

But win Valencia did, to continue what I hardly need remind you is Los Che's best ever start to a LaLiga season. It has been for some weeks now. Marcelino García Toral's men, who always compete regardless of how well they play, are cementing themselves as the only dependable alternative - as things stand, at least - to Barça, who next Sunday visit a Mestalla that will be full to the rafters. Just 1,000 tickets are left; expect them to have been snapped up by the end of Monday. The title race remains alive and kicking - thanks to Valencia.