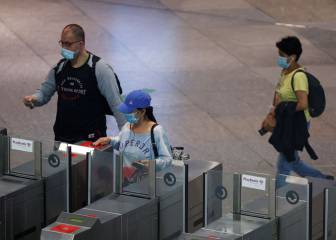 Michael Cheika is being investigated over his foul-mouthed reaction during the Wallabies' 36-6 rugby union defeat to England at the weekend.

Michael Cheika, the head coach of the Australian national rugby union team, is being investigated over his foul-mouthed reaction during the 36-6 defeat by England at Twickenham on Saturday.

The Wallabies coach was captured by TV cameras swearing after a try by Australia captain Michael Hooper was ruled out, and also sarcastically applauded decisions by the referee against his side.

In addition, he was involved in an argument with a supporter just before half-time.

Following Cheika's misconduct, Jon Davis, the disciplinary officer for the Wallabies tour, said he is investigating the incident.

A statement from the body that oversees disciplinary matters for the autumn tests also confirmed the investigation.

"Following various media reports and a referral from World Rugby, the comments and conduct attributed to Michael Cheika are being investigated. An update will be issued tomorrow [Tuesday]," read the statement.

Cheika could face disciplinary charges that, in extreme cases, could result in a touchline or stadium ban.

According to The Independent, Cheika revealed in a press conference after Saturday's match that he had received a "gobful" of insults from fans during the game.

"There are plenty of fans giving me a gobful, I can assure you, and not nice, not pleasant, but that is the way it goes," Cheika said. "I know when I walk down the stairs that I’m going to cop abuse but that’s the way she rolls."

Currently, the Wallabies are preparing for their match against Scotland on Saturday at Murrayfield, their last game of the tour.