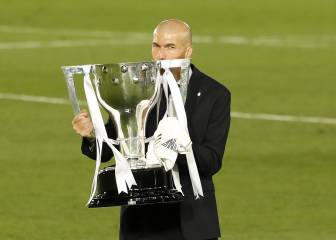 A work of art from Zidane

Real Madrid removed the monkey from their back in Cyprus with a 6-0 victory over APOEL Nicosia that will serve as a shot in the arm for Zinedine Zidane’s side. There is nothing that gets a team back on track and encourages their fans to forget poor results more swiftly than a bit of a thrashing. It can be said, of course, and it has been said, that APOEL are not the stiffest opposition. The morning after the night before isn’t the most opportune day to deny it, but it should be remembered that Borussia Dortmund were unable to beat the Cypriot champions at home or away. Madrid ran roughshod over their opponents and it coincided with Zidane giving the side a much-needed shake-up. He did not drop those who have been playing poorly and those that were brought in were not among the best performers on the night. But a minor reshuffle had the effect of altering recent monotony.

Cristiano Ronaldo scored another two goals, bringing his total in the Champions League this season to eight, in stark contrast to the one he has managed so far in the league. These are the vagaries of football. As well as scoring one he gifted one to Karim Benzema, who also scored a brace that was well-timed, as his lack of goals was quickly starting to get out of hand. Luka Modric and Nacho were also on the score sheet in a satisfying game that was only missing a larger contribution from Lucas Vázquez and Marco Asensio. They appear to be two somewhat disaffected players. They should look to Isco for inspiration. He was playing well but suffering from the omnipotence of the bbC and the presence of the reliable James Rodríguez. But he persevered, he won his place in the side and he remains there.

If Madrid were rowing with the tide, Sevilla were battling against it. Liverpool went 3-0 up in a flash and disaster looked on the cards but this Sevilla side never throws in the towel, they clawed their way back to 3-3 and now they take their qualification prospects to the final day away at Maribor. “In the second half we came out and displayed our pride after the embarrassment of the first,” said goal scorer Guido Pizarro after the match. Pride and decent football, it’s enough to say, that earned a draw that will be remembered for some time. Tonight it is Barcelona’s turn in Turin with the curiosity of seeing if Leo Messi can find the net away from home in Europe for the first in over a year. Meanwhile, Atlético are playing for their lives in the Metropolitano against Roma. God bless the Champions League!