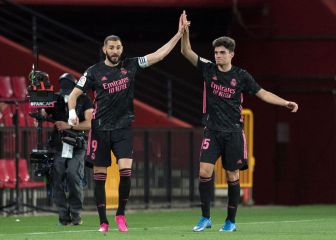 There was really just one half of football played at the Bernabéu yesterday, but boy what a half!  Sevilla were 5-0 behind going in at the break as Madrid scored with ease with two of the strikes coming from Cristiano, the second from the spot which saw his total goals scored against Sevilla rise to 27 in 18 games. Before the game, the striker displayed his five Ballon d'Or awards to the home supporters and left the match in the 75th minute to a solid ovation with the player content to have found the net again in LaLiga. Madrid offered in the first half, undoubtedly their best football of the season with the performance offering a positive dose of morale ahead of the Club World Cup.

It also to be said that Sevilla made life easy for the home side and those who watch the Andalusian side on a regular basis will know that they take a while to get into the groove on any game and this was no different with the team far from alert. Sergio Rico shipped five and he was one of the better players for the visitors. Banega failed to control the midfield and Navas, playing his 415th game for Seville had a night to forget as did Nolito. The defense was even worse: fragile and disorganised...Fortunately for Berizzo's men, Madrid took their foot off the gas in the second half and today head to Abu Dhabi for the Club World Cup competition.

Zidane did surprise many by leaving Isco out of the starting line-up with Asensio taking his place and delivering a solid performance. To be fair, no-one for the home side disappointed as Nacho opened te scoring with Achraf joining him on the score-sheet. Llorente, Ceballos and Isco joined the action in the second half with Zidane anxious to keep the younger players feeling that they have an important role to play in the squad. Both Llorente and Ceballos would like to have secured more first team action so yesterday's involvement will be good for their sense of morale. An excellent evening for the Real Madrid fans who needed a shot in the arm of this nature after recent indifferent performances.