Andy Murray out of Australia Open due to injury 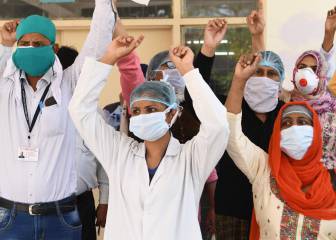 Andy Murray out of Australia Open due to injury

The tournament organisers annouced on Thursday that the former world number one would not be appearing at the 2018 Grand Slam opener.

Former world number one Andy Murray withdrew from the Australian Open Thursday after failing to recover from a hip injury, joining injured Japanese star Kei Nishikori on the sidelines.

Andy Murray has withdrawn from the #AusOpen.

The 30-year-old suffered the injury last year and has not played on the ATP tour since losing in the quarter-finals at Wimbledon.

'Sadly I won't be playing in Melbourne this year, as I am not yet ready to compete,' Murray said in a statement.

'I'll be flying home shortly to assess all the options but I appreciate all the messages of support and I hope to be back playing soon.'

'We are fully aware that Andy has been going through a difficult period with his hip and that he's done everything possible to prepare for the Australian summer,' Tiley added.

Murray's withdrawal comes amid a string of injury concerns that have plagued some of the world's top players and cast doubt on their participation first Grand Slam of the year, which is due to begin in Melbourne on January 15.

Hey everyone.. Just wanted to write a little message on here for anyone interested in what in going through right now. Firstly I want to apologise to @brisbanetennis for withdrawing at late notice and to everyone who wanted to come along to watch me play(or lose😇) The organisers couldn't have been more understanding and supportive and I'll always remember that. Thank you. I've obviously been going through a really difficult period with my hip for a long time and have sought council from a number of hip specialists. Having been recommended to treat my hip conservatively since the US Open I have done everything asked of me from a rehab perspective and worked extremely hard to try get back on the court competing. Having played practice sets here in Brisbane with some top players unfortunately this hasn't worked yet to get me to the level I would like so I have to reassess my options. Obviously continuing rehab is one option and giving my hip more time to recover. Surgery is also an option but the chances of a successful outcome are not as I high as I would like which has made this my secondary option and my hope has been to avoid that. However this is something I may have to consider but let's hope not. I choose this pic as the little kid inside me just wants to play tennis and Compete.. I genuinely miss it so much and i would give anything to be back out there. I didn't realise until these last few months just how much I love this game. Everytime I wake up from sleeping or napping i hope that it's better and it's quite demoralising when you get on the court it's not at the level you need it to be to compete at this level. In the short term I'm going to be staying in Australia for the next couple of days to see if my hip settles down a bit and will decide by the weekend whether to stay out here or fly home to assess what I do next. Sorry for the long post but I wanted to keep everyone in the loop and get this off my chest as it's really hurting inside. Hope to see you back on the court soon 🎾😢❤️

Asian number one Nishikori, who has not played competitively since last August after suffering a torn tendon in his right wrist during a practice session at Cincinnati, also pulled out of the Slam earlier Thursday.

Former world number one and six times Australian Open champion Novak Djokovic has not played since a right elbow issue forced him to quit Wimbledon in the quarter-finals in July and has already cancelled scheduled appearances at an exhibition in Abu Dhabi and the Qatar Open in Doha.

He said he intended to test the injury next week at two exhibition events in Melbourne next week, the Kooyong Classic and Tie Break Tens.