Seven goals with the bbC format 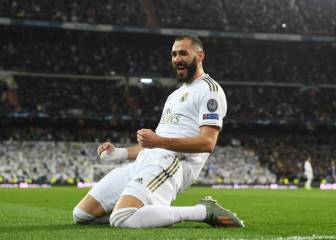 Seven goals with the bbC format

Against Depor Zidane dusted off the bbC format, confirming it's his plan to use it against PSG. Benzema didn't start, but Borja Mayoral was in his place, with the French striker coming on for the last half hour to get some form. Isco is off the map. In Zidane's preferred starting line-up the middle of the field is for Modric, Casemiro and Kroos. Yesterdays festival will only fortify Zidane's conviction. It was a happy afternoon for Madrid, who even recovered Ronaldo's goalscoring. He bagged the last two, not the most important, but goals which should help get him out of the rut he's been in. The second literally cost him blood.

Of course, to tell the whole story, Depor were very feeble. In addition to their absences the whole team has an air of melancholic failure about them, in contrast to Andone's fire - he's a proper demon. Up front they play some nice stuff, at the back they're a sieve. They gave the Bernabéu a fright, going ahead, but Madrid, who had started well, but were beginning to slide into apathy, responded with a torrent of fine football which soon turned the scoreboard around. The second half was an easy stroll towards an absolute tonking. A therapeutic tonking. Goals are the best remedy in football.

Barcelona's thrashing of Betis took the shine off for Madrid

This is a great shot in the arm for Madrid, with the return of Bale like a mighty shot of vitamins. He scored two, both splendid. He showed great physical prowess, pace, passing, shooting and heading. The only negative for Madrid was that theirs wasn't the only big win of Sunday, with Barça's thumping of Betis cooling the enthusiasm somewhat. Barcelona are tremendous right now, 11 points ahead of Atlético in second place in the first week of the second half of LaLiga. And Messi too is incredible, when he turns it on he's completely unstoppable. What a way to play fine football!