Sevilla and Inter Milan on alert for Liverpool's Sturridge 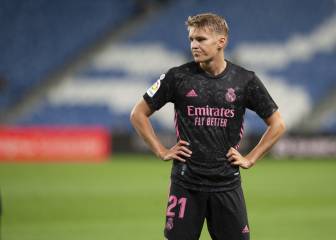 Sevilla and Inter Milan on alert for Liverpool's Sturridge

Daniel Sturridge may yet leave Liverpool, with manager Jurgen Klopp offering the forward no guarantees of regular playing time.

Liverpool manager Jürgen Klopp cannot guarantee Daniel Sturridge more game time even if the forward stays at the Premier League club. The 28-year-old has been linked with a move away from Anfield in January after starting just five league games this season. Klopp said he was unable to offer the England international any assurances over his game time.

No promises for any player, says Klopp

"I have never in my life promised a player game time for the next few months. It is not possible. We have mentioned all the things like it was so far," the German coach told UK newspapers. "When Daniel is fit, training in shape he is still an outstanding striker there is no doubt about that. But he did not play the last few weeks – for different reasons. Of course one of them was Roberto Firmino's performance, then Dom Solanke's development. And Daniel was in and out of training. In general more in than out in training, but the time he was in he was a little unlucky with games. That was the situation, not more."

Sturridge last netted at least 20 league goals in a single campaign in 2013-14, when he made 26 starts, and a move away from Merseyside could help boost his chances of being selected for England's World Cup squad. Klopp said he was unsure if the forward would remain at the club beyond the January transfer window. "I cannot give an answer on that. It is an open thing. There are a lot of rumours around and that this moment there is nothing to say about it," he said. "So far we needed him and we will see what happens in the next few days, to be honest."

Sevilla are hoping to reinforce their squad and with a deal parctically done for Swansea misfit Roque Mesa, now the southerners want to beef up their attack by bringing in a player who can provide competition for Ben Yedder and Luis Muriel. Chelsea's Michy Batshuayi is their first option and Sturridge is the alternative. According to Italian media, Inter are also pushing to take the Liverpool player to Milan on loan for the rest of the season and would include a purchase clause, giving them the option to buy Sturridge for 25 million euros in the summer.

Cristiano Ronaldo: “I want to stay at Real Madrid”