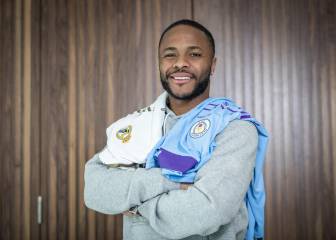 Sterling: "What Zidane's done isn't down to luck, it's a formula"

Mohamed Salah and Liverpool are not daunted by their Champions League quarter-final showdown with Manchester City.

It will be an all-English affair when Liverpool and Premier League champions-elect City go head-to-head in the quarter-finals of Europe's elite club competition.

City are 16 points clear atop the table and 18 ahead of third-placed Liverpool in the Premier League but Jurgen Klopp's men are not daunted by the task ahead, having been the only side to beat Pep Guardiola's team in the league this term.

"He's scored some brilliant goals and his work-rate off the ball was good as well, like I keep saying."@JHenderson pays tribute to @22mosalah and 'great reaction' to Old Trafford defeat 👉 https://t.co/Xqgbr14adq pic.twitter.com/I39LYYpSAI

Salah, who scored four goals in Liverpool's 5-0 rout of Watford on Saturday, said: "I don't believe that City have always been ­superior to other clubs this season in the Premier League – despite what everyone says. We have beaten them for a start.

"The Champions League always ­depends on the draw, but we don't fear any rival, whoever they are.

"We're in the quarter-finals and have the same chances of winning as each of the other seven teams."

English side will make the semis

Salah, whose Liverpool host City at Anfield on April 4 before travelling to Manchester for the return leg six days later, added: "There are many big clubs still in the competition but you have to remember Liverpool are a great club in Europe too. In these knockout ties, ­anything can happen."

The Egypt international forward has been a phenomenon since arriving from Roma at the start of the season, scoring 34 goals in all competitions – 27 of those in the Premier League.

After scoring his second of the match against Watford on Saturday, Salah surpassed Fernando Torres' record for the most goals netted in a debut season for Liverpool.