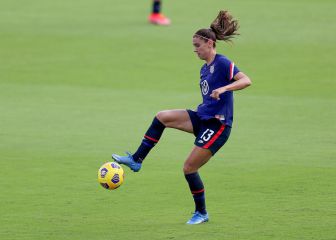 Before Sevilla and Bayern Munich tussle in the Champions League, we revisit their only previous meeting; Diego Maradona's return to Spain.

It is Monday September 28, 1992, and Sevilla's Ramon Sanchez Pizjuan is the location of a media circus rarely seen before or since in the stadium. Bavarian giants Bayern Munich are in town for a hastily arranged friendly.

Prior to the two sides' meeting in the Champions League quarter-finals on Tuesday, this friendly 26 years ago is the only previous occasion in which Sevilla faced their illustrious German visitors.

Yet, Bayern were not the focus of the media attention. No, they were there for the first game of Diego Maradona's return to Spain.

They played in Diego Maradona's presentation friendly in September 1992!

The world's most renowned footballer - formerly of Barcelona - was barely given enough space to take part in the coin toss such was the scrum around him, with microphones and cameras shoved towards his face with little regard by voracious reporters.

Maradona, wearing the captain's armband, was making his comeback from a 15-month ban for cocaine use which ultimately ended his love affair with Napoli.

From midfield, the 31-year-old dictated the tempo and stretched Bayern's defence with his imaginative passing. He, Diego Simeone and Rafa Paz combined excellently in the middle, while an understanding with a young Davor Suker showed evidence of promise.

Maradona forced goalkeeper Raimond Aumann into a smart early save before hitting the crossbar with an audacious free-kick from near the corner flag.

Out of shape, unfit and without competitive football in over a year, Maradona was still the best player on the pitch, setting up Suker before also playing a key role in one of Monchu's goals. Sevilla won 3-1.

His weight was mocked by a banner depicting a Maradona caricature whose belly could not be contained by his jersey, but, his "cosmic barrel" physique aside, this was the same player who had astonished with Napoli and Argentina.

Bilardo called the signing a "gift", while Maradona said his "happiness is complete" upon arrival at Seville's San Pablo airport in a striking cerise suit – "I looked a treat," he concluded about his fashion sense.

Having lost Ivan Zamorano to Real Madrid, Sevilla president Luis Cuervas and vice-president Jose Maria del Nido will have been looking on, certain they had pulled off a masterstroke by getting Maradona in as a replacement, reportedly boosting season ticket subscriptions from 26,000 to 40,000.

His performances continued to excite in competitive games and he enjoyed what many consider to be his best display in Spain during an ill-tempered 2-0 win over Real Madrid on December 19.

Maradona, with his wife and daughters in the photo, dressed as King Balthazar in a parade organised by #SevillaFC (1993)
Photo: Nieves Sanz https://t.co/pxHjP4S0Kp

Madrid, complete with the likes of Manolo Sanchis, Fernando Hierro, Michel and Luis Enrique, simply had no answer as Maradona ran the show. Everything was going as well as it could have, until things – somewhat inevitably – turned ugly in the second half of the season.

A dispute over El Diego's juggling of international and club commitments saw the two parties at loggerheads, but things got out of control late in the campaign.

After being given painkilling injections against his will for a persistent injury caused by receiving a kick from an angry Venezuela fan in 1985, Maradona was withdrawn by Bilardo early in the second half of a 1-1 draw with Real Burgos and he blew his top.

"Bilardo, you m**********r," he claimed to yell in his coach's direction, with the pair coming to blows a day later, as detailed in the troubled star's autobiography.

What made the situation worse for Maradona was Sevilla's chiefs revealed to him just a few days earlier their plan to offer him a player-coach role after ditching Bilardo. They received a stern refusal in reply, with El Diego not about to betray his friend, but he ultimately felt as though such loyalty was not reciprocated.

Everyone wanted out of the marriage, and Del Nido's public comments about Maradona's fitness proved the final straw.

"That's probably why that w***** Del Nido dared to say I wasn't even fit enough to play table tennis; to make me leave," Maradona wrote in his autobiography. "He knew I wouldn't put up with that kind of stuff. And that's how it happened, that was how my story with Sevilla ended. Badly."

Maradona then missed out on £625,000 worth of unpaid wages as Sevilla withheld payment because he had "not met obligations to the club", bringing a bitter close to a chapter which had promised so much on a thrilling evening against Bayern.