Bayern Munich without Vidal and Alaba for Sevilla clash - Heynckes 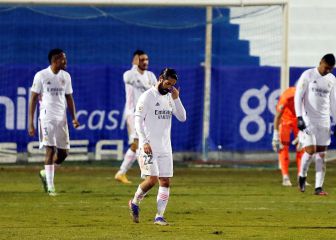 Six Madrid players under the microscope after 'Alcoyanazo'

Bayern Munich without Vidal and Alaba for Sevilla clash - Heynckes

Arturo Vidal and David Alaba will both miss Bayern Munich's clash with Sevilla on Wednesday, though Jerome Boateng could be back.

Boateng back, as Vidal and Alaba sit out

The Bundesliga champions, who wrapped up their domestic title on Saturday, go into the clash in charge of the tie having won 2-1 at the Ramon Sanchez Pizjuan.

Vidal and Alaba will not be featuring in the second leg due to their respective knee and back problems, but Heynckes should be able to select Jerome Boateng.

#Heynckes: "I think that @kingarturo23 will be able to start training again on Thursday." #FCBSFC pic.twitter.com/FAAQ1SiLJD

Alaba last played in the 6-0 hammering of Borussia Dortmund on March 31, while Vidal had to be replaced after 36 minutes in Seville, and the return leg comes slightly too early for both.

"Jerome is free of any problems," Heynckes told reporters on Tuesday. "He has been training very well.

"David has been almost at full capacity, but he has not been able to train with the team for the past few days, so I think it's better to do some more training sessions and maybe on Saturday he will be ready for action.

"Arturo is doing very well, maybe he will be able to train with the team again on Thursday."

Arjen Robben only featured as a substitute in the first leg, but is likely to start at the Allianz Arena and Heynckes spoke glowingly of the Dutchman at his news conference.

"When he did not play from the beginning in Sevilla, as the media, you speculated," Heynckes said.

"Then he could rest and train well - on Saturday you saw a Robben full of desire and with fitness levels like five years ago.

#Heynckes: "Football is @ArjenRobben's life. He's as fit as he was five years ago and is the kind of guy you want in big games. I have a lot of faith in him for tomorrow."#FCBSFC pic.twitter.com/nLUFVazM3D

"On the one hand he's an absolutely top professional, but he's also saved himself the pleasure of playing football, which is at the heart of his life. He does it with passion.

"Players like him and Franck Ribery know that this is a phase in which we have to be absolutely perfect, physically, mentally and emotionally. I am very confident for tomorrow."