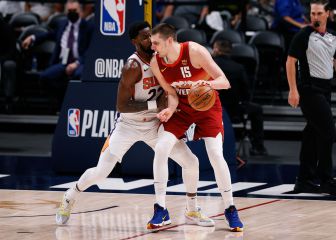 Why is Nicola Jokic declining to play with Serbia in Tokyo OIympics?

Having dumped out favourite Rafael Nadal on Friday, Dominic Thiem will contest the Madrid Open final after beating Kevin Anderson.

Dominic Thiem backed up his shock victory over Rafael Nadal with a comprehensive 6-4 6-2 beating of Kevin Anderson to book his place in the Madrid Open final.

Nadal's unbeaten run on clay, which had stretched back to his defeat against Thiem at last May's Internazionali d'Italia and seen him win 50 consecutive sets, was unceremoniously ended by the Austrian on Friday.

And Thiem was again clinical against the eighth-ranked South African, who was playing in a Masters 1000 semi-final for the first time in his career.

It means the world number seven can now go in search of a second ATP title of the season and look to avenge his defeat to Nadal in the final 12 months ago.

World number seven Thiem broke in a hard-fought opening game and spent much of the first set on the offensive, almost breaking again at 3-1 when Anderson just edged a lengthy rally.

The set was soon wrapped up regardless, before Thiem quickly moved two breaks up in the second as his opponent failed to live with a dominant display.

That gave the 24-year-old the opportunity to serve for the match after just under 90 minutes and he took his chance, setting up a showpiece clash with either Denis Shapovalov or Alexander Zverev.

Nadal unfazed by losing number one status to Federer