Rockets-Warriors not a 'chess match' for Harden 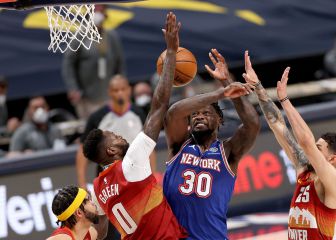 Rockets-Warriors not a 'chess match' for Harden

Rather than think strategically about the Golden State Warriors, James Harden wants to keep his focus solely on the Houston Rockets.

James Harden does not see the Houston Rockets' Western Conference finals series against the Golden State Warriors as a "chess match".

The Rockets drew the series level at 1-1 by winning game two at Toyota Center 127-105 on Wednesday, Harden posting 27 points and 10 rebounds.

But a strategic and tactical battle with defending champions Golden State is not of interest to the Houston superstar.

"I wouldn't call it a chess match, I would just say we have to refocus on what we're supposed to do," said Harden.

"We don't really worry about who we're playing against. If we come out and be some dogs and do what we did tonight, it doesn't matter. But if we don't then we saw the result in game one. It's not about a chess match, it's about us."

James Harden goes for 27 PTS & 10 REB to help @HoustonRockets even the series at 1. #NBAPlayoffs pic.twitter.com/OQugIZt0Nx

Harden is proud of how the Rockets have responded to setbacks in the playoffs, but wants them to maintain that mentality for the remainder of the postseason.

"Look back at the Utah [Jazz] series, we lose game two and take our focus to another level and have a pretty good game in game three and get greedy and win game four," he commented.

"So, the same thing happened. We knew how difficult it was going to be, but we didn't come out with the approach of it being that difficult, in the sense that we lost game one.

"But we had that mindset tonight, after a loss to be the aggressor, and we have to keep that mentality. No matter where we are, if we keep that mindset we're in good hands."

It was suggested Houston's approach to game one, which had a heavy focus on Harden operating in isolation plays, would need to change if they were to overcome the Warriors, but head coach Mike D'Antoni has no doubt his philosophy will bring rewards.

"You have one of the best offenses probably of all time, at least with Golden State, and they're one of the best all-time teams. We're trying to prove we're up there with them. You're not going to come in and change the way you play. That's the way we played all year," said D'Antoni.

"We are who we are, and we had to be who we are. We just did it better, longer. Guys believe it, and we're not going to change anything up. That would be silly on my part to panic. You don't do that.

"We're very comfortable about who we are, and we can beat anybody anywhere at any time playing the way we play. Some people might not like it, you know? It might not look good to some people. But it's effective. It's efficient."

Atlanta Hawks zeroing in on 76ers assistant Pierce as coach