Having played in nine of England's World Cup qualifiers, Joe Hart is "gutted" to have been left out of the squad heading to Russia.

Joe Hart says his omission from England's final squad for the World Cup has been "hard to take".

The 31-year-old was overlooked by boss Gareth Southgate for the final 23-man group, with Jordan Pickford, Jack Butland and Nick Pope the three goalkeepers included, while Tom Heaton is on the standby list.

Hart, who has earned 75 senior caps for his country and played in nine of their 10 qualifying matches for Russia 2018, has found it difficult to accept the decision.

Writing on his official Instagram page on Friday, he said: "Not going to lie, I'm gutted. After two years of trying to make the most of a really tough situation, this is hard to take. I'm proud to have put in the graft and play every minute to qualify with the team and have a really important input in that outcome. I know what I bring to the team, but it is what it is.

"Good luck to the team out there, the players know that even though I won't be there, I will have my England shirt on as a fan this time and supporting all the way.

Missing out on the World Cup is the latest blow in what has been a difficult two years for Hart.

Having found himself surplus to Pep Guardiola's requirements after the Catalan's appointment as Manchester City manager, Hart spent 2016-17 on loan at Torino, where he committed a handful of high-profile mistakes.

He was then signed by West Ham for 2017-18 but only made seven Premier League appearances out of a possible 26 after David Moyes took over as manager in November.

Hart, whose City contract expires at the end of next season, is expected to leave either on another loan or a permanent deal in the next transfer window. 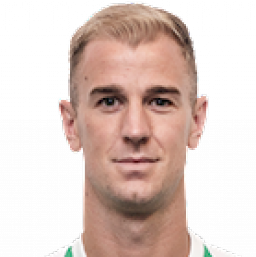