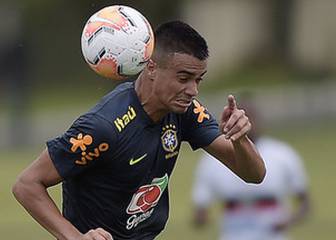 Denmark coach Age Hareide says striker Nicklas Bendtner was unable to prove his fitness to be selected in his final World Cup squad.

Denmark's final 23-man squad for the World Cup has no place for Nicklas Bendtner after the striker suffered an injury playing for Rosenborg.

Bendtner hurt his groin prior to travelling to Denmark's training camp and the former Arsenal man missed Saturday's goalless draw against Sweden in Stockholm.

Coach Age Hareide said he gave the forward a chance to prove his fitness, but Bendtner was unable to show he could play a part at the World Cup, where Denmark have been drawn with Peru, Australia and France in Group C.

Bendtner a big loss for Denmark

Bendtner is the second top goalscorer in Denmark history, with 30, and his absence will be keenly felt by Hareide's men in Russia, with defender Andreas Bjelland also missing out due to injury.

"We don't believe they'll be fit in time for the first game against Peru, it's too tight and that match is very important," Hareide said.

"Most likely, we are battling Peru and Australia for second place, and that's why it's important to get a good start, and we have to have fit players."

Tottenham playmaker Christian Eriksen, whose hat-trick in November's play-off win over Republic of Ireland secured World Cup qualification, is the undoubted star name in the squad.