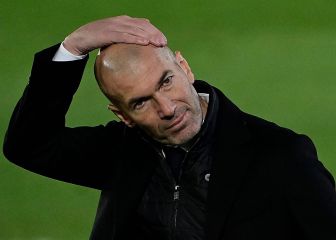 With no Benzema, Zidane has no attack

A fine performance from Real Madrid, who I'd say were fantastic in the first half, and another piece of silverware for the Bernabéu trophy cabinet. Cristiano Ronaldo didn't feature until the final quarter of an hour, so rather than the BBC we saw a 4-4-2, which always works better. In that set-up, the imprint of a superb, decisive Isco was on everything Real did in the first period as he pulled the strings and popped up on both flanks. Casemiro's runs into forward positions caught the eye, too, the Brazilian leaving his area of the field on a few occasions, with Toni Kroos stepping in to cover him. On one of those forays - having already smacked a wonderful header off the crossbar from a corner - he grabbed the opener, finishing off a Dani Carvajal cross with shades of offside. Replays were inconclusive.

Casemiro's goal separated the teams at half time, with Real Madrid having looked much the better side. All they were lacking was a greater finishing touch in front of goal, because, of course, they were without Cristiano. Karim Benzema is an excellent second striker, but with no-one to be second to... And Gareth Bale, who was active on the wings, wasn't able to pose a scoring threat in the first 45 either. So it was 1-0 at the break, which didn't reflect the gulf in the teams' overall play. Fortunately for Real, Isco quickly doubled their lead early in the second half, firing in across David de Gea with aplomb after a lovely one-two with Bale, who later thumped a strike against the bar. However, it proved to be a different affair in the second period, with the introduction of Marouane Fellaini and Marcus Rashford seeing Manchester United improve and come back into it.

At which point, Real went through a tricky patch. United are more of a team in construction than Los Blancos, who by now know their game inside out, but the Premier League men are further along in their pre-season, and it showed. The minutes began to take their toll on Real and Keylor Navas was forced into some fine interventions, finally conceding to Romelu Lukaku after parrying a Nemanja Matic shot as best he could. Things calmed down again, though, when fresh legs came on in the shape of Marco Asensio and Lucas Vázquez, and Cristiano shortly after. United's impetus abated and Real settled once more, even coming close to a third when sensational play by Lucas carved out a chance for Asensio. A win as deserved as it was hard fought, and another Super Cup is added to the club's roll of honours.

Photo gallery: Casemiro and Isco guide Madrid to first trophy of the season