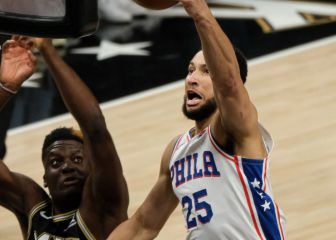 The 16th seed became the first American to win the tournament since Andre Agassi in 1999 with a three-set victory over qualifier Filip Krajinovic.

Jack Sock recovered from a set down to beat qualifier Filip Krajinovic 5-7, 6-4, 6-1 to claim the title at the Paris Masters on Sunday, snatching a place at the World Tour Finals into the bargain as he secured his biggest tournament win to date.

The 16th seed ended his Serbian opponent's fairytale run in the French capital to break into the world's top 10 for the first time and take the last place for London from Spaniard Pablo Carreño Busta.

Despite dropping a tight opening set, the 25-year-old upped his game and stormed through the decider to claim the biggest title of his career.

"To be standing here after being so far down in my first match is incredible," Sock, who trailed 5-1 in the third set of his opener against Briton Kyle Edmund, told the crowd after winning his third title of the year.

"This will be my first time in the top 10 and first time at the Tour Finals in London, so much is going on right now."

Sock rises to US number one

Sock, who was 24th in the 'Race to London' standings before arriving at Bercy, will become the American number one for the first time, after beating the man who knocked out his compatriots Sam Querrey and John Isner earlier in the week.

Krajinovic showcased the game that took him to the brink of becoming the first qualifier to win a Masters title since Albert Portas in 2001, but ultimately he failed to become only the second Serb after Novak Djokovic to triumph at this level.

"This was the best week in my life," Krajinovic said. "I will never forget this moment in my life. Coming from qualifying to the final was a dream come true."

Any worries that the world number 77 would struggle with nerves were quickly put to bed as he held his opening service game with an exquisite drop shot.

Sock had dropped serve eight times going into the final and Krajinovic brought up the first break point of the match in game five.

The world number 22 saved it with a drop volley, but the underdog quickly created another opportunity and Sock gifted him the break with a double fault.

Sock immediately hit back as Krajinovic, also 25, produced a sloppy game, finished off with a wild forehand into the tramlines.

Krajinovic up to world number 33 after Paris run

But Krajinovic, who will rise to 33 in the world rankings on Monday, brought up a set point in the 12th game as he made the most of his freedom to attack the Sock serve at 6-5 ahead, and the American dumped a forehand into net.

The enormity of the situation appeared to hit Krajinovic at the start of the second set and Sock broke in the opening game.

The top-spin on Sock's forehand was causing all sorts of problems, helping secure a double-break as he looked set to take the match to a decider.

He took his foot off the pedal to give one of the breaks straight back, but closed out the set with a confident hold to love.

Sock had come from a set down to win the pair's only previous meeting at a Challenger in the United States three years ago, but he failed to strike another early blow in the third set as Krajinovic held after a lengthy first game.

The vital breakthrough came shortly afterwards though when Sock crunched two magnificent passing shots from well behind the baseline to leave Krajinovic stunned.

That was the moment that the momentum the qualifier had built up through the week was finally halted, and he fell further behind when Sock stretched to send a backhand flying into the corner.

He wasted no time in wrapping up victory with a run of six games on the spin as Krajinovic fired long on match point.