Football in England...and in the Canary Islands 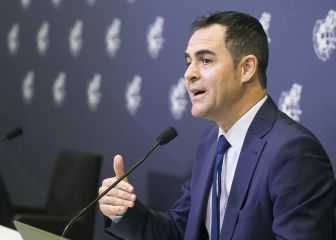 Football in England...and in the Canary Islands

As is the tradition, on December 28 every year we become kids again. The photographs that accompany each journalist in the paper version of AS are from our respective childhoods as a homage to the "Dia de los Inocentes", Spain's version of April Fools' Day. Many of us still have a childhood innocence in our line of work and at times we live in a version of Peter Pan's Neverland. At times it's important and this is a useful aptitude to have when putting perspective on the world of sport and it's role in day-to-day life. Sport may not offer solutions to complex daily situations but it can provide happiness with the difficult issues being areas for adults to resolve.

Christmas is a time for children and every year I'm disappointed to see our league take a break with the focus on football being given over to the Premier League. In a recent interview with Guillem Balagué, Brighton player Bruno Saltor summed it up perfectly: “When you see so many kids in the crowd, you understand things and there is a wonderful atmosphere at the stadium”. Four match-days will be played in the English Premier League over the holiday period followed up with the third round of the FA Cup and all this action takes place from December 23 through to January 8, 2018.

For many this period is an ideal time to attend sporting events with many kids attending a game in England for the first time and at least we can take a little confort from the International Liga Promises tournament in the Canaries which was founded by Carmelo Zubiaur and recently overseen by José Ramón de la Morena. Kids simply playing football and nicely transmitted in the words of Rabindranath Tagore: “Each child brings us a message from God that has still not given up all hope on mankind”. We then grow up and ruin this hope.