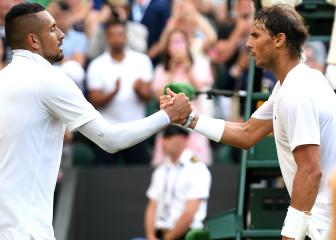 Nadal and Kyrgios to renew rivalry in Melbourne showdown

DeMarcus Cousins looks set to miss the rest of the NBA season after suffering an Achilles injury, prompting LeBron James and Gordon Hayward to offer support.

LeBron James and Gordon Hayward were among the NBA stars to send get-well-soon wishes to DeMarcus Cousins after the New Orleans Pelicans center suffered what appears to be a season-ending Achilles injury.

The Pelicans' impressive 115-113 win over the Houston Rockets on Friday was soured after All-Star Cousins had to be helped off the court due to a non-contact injury to his left leg, which he sustained with only 12 seconds of the match remaining. According to widespread reports, initial scans showed the 27-year-old has torn his Achilles tendon and will subsequently miss the rest of the season. His status will be officially confirmed after an MRI on Saturday.

The development comes as a huge blow to the in-form Pelicans (27-21), who have won seven of their last eight games to sit sixth in the western conference. Cousins recorded a triple-double of 15 points, 13 rebounds and 11 assists against the Rockets prior to his injury, continuing his stunning season.

He is averaging 25.2 points, 12.9 rebounds and 5.4 assists and was set to play alongside NBA icon James and Pelicans team-mate Anthony Davis in next month's All-Star game. "We were just getting it," said Davis, who also reached out to Cousins on Twitter. "We were just figuring everything out. That's the tough part. We've just got to keep going. We've got to keep going and keep finding a way to win."

Pelicans coach Alvin Gentry added, "I feel horrible for him," he told ESPN. "We were starting to play damn good basketball – DeMarcus has been great. Everything that he's done, and what he's tried to do for us this year and what he's made himself and the improvements in all areas that he's made on and off the court, has just been great. I don't want that to happen to a guy that's trying to better himself."

"Thoughts out to [Cousins] – hope you good big fella," James added on Twitter, as Boston Celtics forward Gordon Hayward - who suffered a gruesome broken leg on the opening night of the season - and a host of other big names also showed support for Cousins.

Thoughts out to @boogiecousins! Hope you good big fella. 🙏🏾

My dawg!! Tough to see bro but I know you gonna come back stronger than ever. We gone hold it down for you!! #Pels #Brothers pic.twitter.com/BLCs07ZdrH

Prayers go out for @boogiecousins...Stay positive through this man!

prayers up to @boogiecousins. hate to see that happen. come back stronger and better.

Praying hard for my brother @boogiecousins right now!!! God’s got you fam