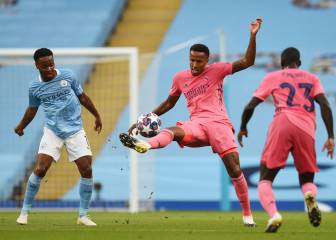 After Los Blancos dropped more points in LaLiga, Sergio Ramos lamented the abnormal gap between his side and Barcelona.

Real Madrid captain Sergio Ramos said his team had done a lot wrong to fall so far behind Barcelona in LaLiga after they dropped more points Saturday.

Despite taking the lead twice against Levante, Madrid were held to a 2-2 draw and, if Barça beat Espanyol Sunday, Zinedine Zidane's men will be 21 points behind their rivals.

Ramos, who became the first defender in LaLiga history to score in 14 consecutive seasons with his opener, said his team had continually let good positions slip.

"We will continue fighting to stay as high as possible. The Champions League and the rest of the season should serve to try to recompose the group," he said.

"It is not normal to be at this distance. We have done something wrong, letting many points slip away in games we were controlling. It has been one of our worst years.

"The team works hard, nobody is hiding. Everyone steps up and when there is a complicated situation you have to be protected, be united, and it is the only way to do something worthwhile in the Champions League."

With their LaLiga hopes dashed, Madrid will focus on winning a third straight Champions League crown, with Paris Saint-Germain awaiting in the last 16.

Ramos, whose side host the first leg against PSG February 14, called on his team to stay positive and improve. "We are disappointed because it was a game that we had controlled in general and in the end the points escaped us," he said.

"We had a good first half; we were playing well and on top, but with their first chance they drew level. It is true that this season that has happened to us several times but things improve with work. You have to keep working and keep at it. In this situation, we must be united and strong, and be positive to improve. We believe in our ability."