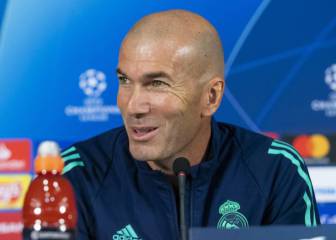 Zidane: Guardiola is the best

Sergio Aguero was involved in an altercation with a fan as unsavoury scenes marred the aftermath of Wigan Athletic's stunning 1-0 FA Cup win over Manchester City.

Will Grigg scored the only goal of the game after 79 minutes to book a quarter-final tie against Southampton for Paul Cook's League One promotion-chasers and end the runaway Premier League leaders' prospects of a historic quadruple.

A significant number of home supporters invaded the pitch to celebrate when the full-time whistle sounded at the DW Stadium and television pictures showed a Wigan fan approaching Aguero from behind, appearing to say something to the Argentina striker, who swung round a right arm and struck the man.

Meanwhile, some of the travelling City support were involved in an altercation with stewards, during which objects – including an advertising hording – were thrown.

Reacting to the events, Wigan chairman David Sharpe told BBC Radio 5Live: "It is not nice to see, football is emotional, it is what it does to fans. But I don't like to see this at the end of the game.

"It is a massive result, but we have to stay classy in football. I don't like what I am seeing here."

Earlier, tempers threatened to boil over between both sets of players and their coaching staff when City left-back Fabian Delph was sent off for a rash lunge on Max Power in first-half stoppage time – a challenge that will rule the England international out of Sunday's EFL Cup final against Arsenal.

Referee Anthony Taylor had a yellow card in his hand initially, with the dismissal serving to rile Delph's team-mates and provoke furious reaction from Pep Guardiola on the touchline.

However, Guardiola's opposite number Paul Cook played down the flashpoint.

"There's no problems," the Wigan boss told BBC Sport. "From our point of view we're trying to get every edge and everything we can, and from his point of view he wants the game played and he's a fantastic manager."