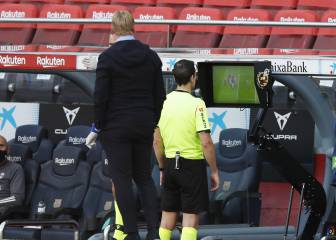 Spain woke up yesterday to the news that Sandro Rosell, former Barcelona president, had been arrested with a search of his home - where his business activities occur - taking place. It is, according to all the information, an offshoot of Fifagate, that scandal that blew out Sepp Blatter from the world of football's governing body. Rosell is implicated in the money laundering of 15 million euros, through his hazardous friendship with Ricardo Teixeira, the man who has been pulling the strings of Brazilian football. The movement of football's black money to the United States saw the intervention of the FBI, which then led to a series of arrests.

This news arrives like the aftershock to an earthquake. It only affects Barça tangentially, with Rosell now no more than an ex-president. His untimely departure from the club is now not only understood but something to be grateful for. But it was also thanks to his Brazilian contacts that his presidency was boosted. The Nike contract with the national team and the star signing of Ronaldinho were the accomplishments that pushed him on. "I will not fail you," he announced. Then he dedicated his time to undoing everything that his predecessor Laporta had done, getting rid of the likes of Cruyff and Guardiola, before disappearing overnight, with little trace of any convincing explanations to justify it.

Embarrassment for Barcelona and Bartomeu

For his successor, Josep Maria Bartomeu, by virtue of having been his vice-president, it is a blow, and one that could have a further turn for the worse depending on how the Neymar case pans out - something both he and Rosell are implicated in - and the situation with Qatar. For the good name of Barça this is an unexpected setback, a clear embarrassment, because it stems from a very recent club president. Likewise for football in general. We are in a time where we have witnessed the discovery of the indiscretions of those many fortune seekers, and unfortunately we have to admit that many of them found a comfortable home in football. It's all alleged, of course. But let's agree upon one thing; it doesn't look very good.

What next for Barcelona?

"It's been a good season", says Barcelona president Bartomeu