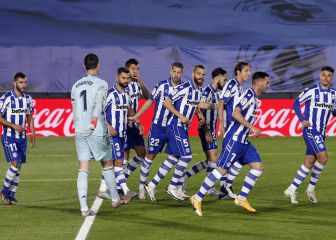 Diego Simeone said poor concentration along with a number of suspensions and injuries contributed to Atlético Madrid's shock defeat to Espanyol.

Diego Simeone pointed to suspensions and tiredness among his players as factors in Atlético Madrid's first LaLiga home defeat of the season.

Atlético were beaten 2-0 by lowly Espanyol, who were the better side throughout and triumphed thanks to an own goal from Stefan Savic and Leo Baptistao's effort.

Simeone: 'We're short of players and it showed'

The hosts were without the suspended Diego Costa and Ángel Correa, while Antoine Griezmann was an unused substitute following his midweek exploits in the Europa League semi-final victory over Arsenal.

Simeone told reporters that he was not surprised to see his side lose their unbeaten home record, saying: "Playing as often as we have played, we knew there could be a game like this.

Godín and Gabi both ageing

Atlético face a busy end to the season, playing three games in eight days as they take on Getafe and Eibar either side of the Europa League final against Marseille.

Simeone suggested that some of his team's senior players have been struggling with the congested schedule.

Midfielder Vitolo was replaced after 26 minutes against Espanyol due to a thigh injury.

Simeone added: "It's a shame about Vito because I wanted continuity and I was getting it. Let's hope the injury is as minor as possible."